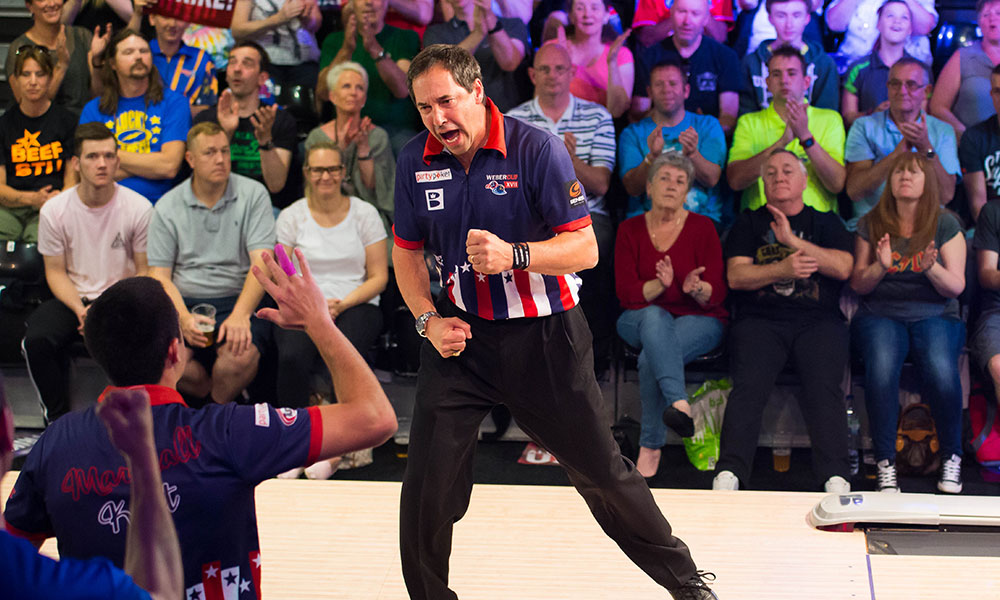 THE AMERICANS took the Saturday afternoon session of the 2016 partypoker Weber Cup by a 4-3 margin and it was a much needed return to form which reduced the Europeans overall lead to four points with the tally now standing at 9-5.

The Americans selected a much longer 45 foot lane pattern and it seemed to work for them although it was hard earned at every corner. Big Wes Malott took the opening point of the session in a thriller that went to a sudden death play-off with Stu Williams. Tied up at 234 pins apiece, they both struck with their opening bowl, before a strike by Malott in the next round scored the win.

The Europeans though took the next two as the ice cold debutant Jesper Svensson won the first pairs match of the event, partnering Stu Williams and then came out for his singles match against Marshall Kent.
The American foot fouled early on to set himself back but the cool Swede struck time and again as he set himself up for a 300 game. That faltered in the closing stages but he still ran out a 52 pin winner.

With it slipping away, Parker Bohn III and Kyle Troup dug in deep in the next to nick the point by a seven pin margin before Martin Larsen squeezed past Bohn when defeat looked definitely on the cards.

The Americans though, won the final two games as Wes Malott and an ever-improving Kyle Troup won a close doubles game and then Malott closed it out with a solid win over Dom Barrett.

Commented Malott; “In the final match, Dom was relatively new to the pattern and I had been fortunate to play a few matches on earlier in the session. He got a little lost there at the end of the game. I was glad I was able to throw the shots I needed to put it away.

“The lane pattern could be a big factor, I think they will pick the pattern they played on last night so we have seen it and we will know what to do and need to go out there and perform. The guys making their debut are getting settled in and getting comfortable and I think the Europeans will have a little more to deal with this next go around on the same pattern.

“For me I will find some cool air, chill out and get ready for this evening’s matches.”

European captain Dominic Barrett put his team’s position in perspective: “USA did a lot better than they did last night but the key for us is that we still played well.

“We have played well the last three years and if we keep doing that then it will work out for us. It is pretty hot under those lights so we will go and cool down, have a chat and chill out and start again.

“We won the first session heavily and we won that one by a point, so we are still in a great position and all playing well, and that is the key thing.

“The way the singles worked out, we wanted to give everybody a chance to make sure we were all playing well, that was more important for us than putting out any big guns because we didn’t have to.”