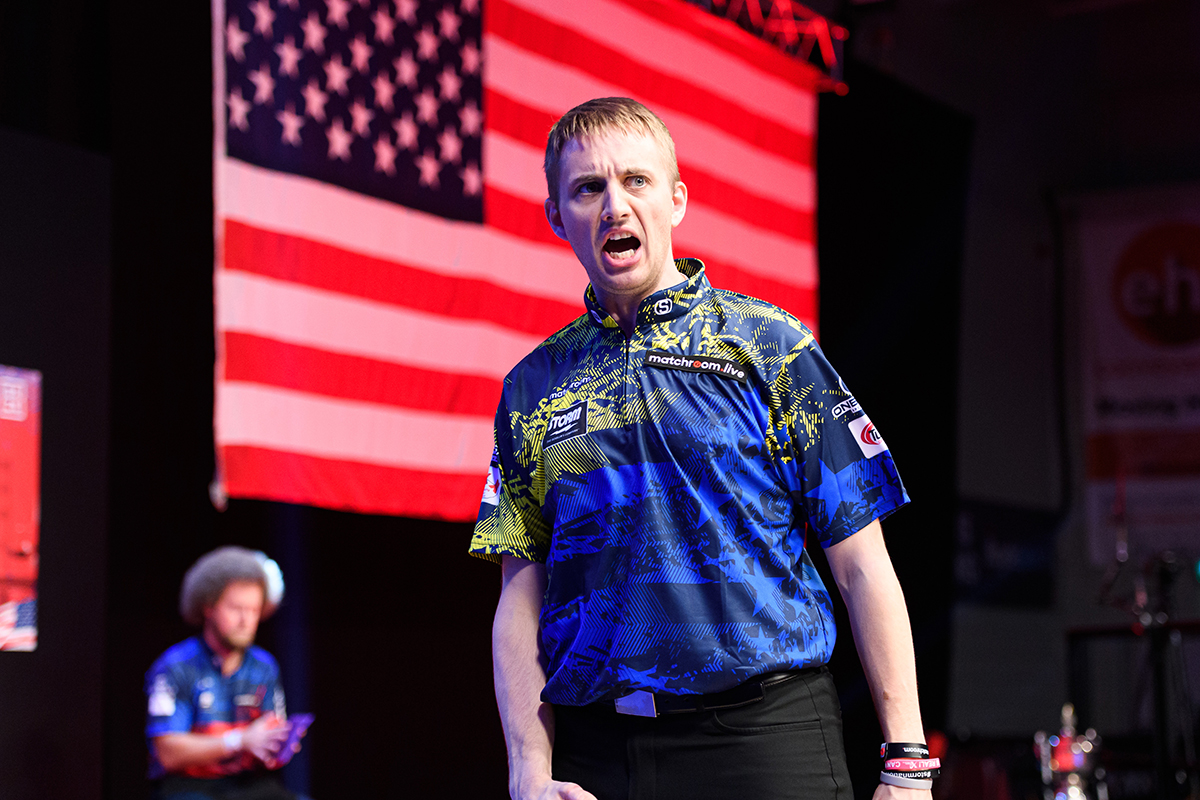 Team Europe took an early advantage as the 2021 Weber Cup got underway at the Morningside Arena, Leicester live on Sky Sports in the UK, DAZN in the USA, and Viaplay across Scandanavia.

Team Europe was buoyed by the return of fans for the first time on home soil since 2018 and took the opening baker match 242-213 with captain Dominic Barrett leading from the front with a confidence-boosting early strike and Jesper Svensson demonstrating why he’s one of the world’s best to give Europe an early advantage.

USA Captain Chris Barnes struggled in the baker match but found his feet midway through the first singles contest against Thomas Larsen putting in a four-bagger to put the pressure on the Dane when it looked like it would be Europe going into a 2-0 lead. Barnes’ strike in the last frame meant Larsen didn’t have much room for movement despite leading but it was the experience of the USA’s captain that prevailed 257-245.

Europe’s Stuart Williams made the first real breakthrough against Anthony Simonsen, a fixture where he lost out in last year as the USA steamrollered their way through. Williams has been nicknamed as Europe’s Ian Poulter by Barrett and it was clear he took that in his stride after Simonsen left the sixth frame open for Williams to deliver a point.

Barrett was back out for his 67th singles match in the Weber Cup against debutant Tom Daugherty but he struggled after leaving three open frames to hand the rookie a win and level for the USA for the second time on the night.

Momentum ebbed and flowed in the first doubles match after four frames but it was the American’s who pulled ahead for the first time in the contest, with Barrett struggling to get to grips with the oil pattern for the night makhaira.

From watching on in the crowd a few years ago to a dream Weber Cup debut, Europe’s Richard Teece downed recent US Open championn Chris Via 234-204 with five strikes along the way to make it 3-3 with his family watching on. He set the tone early on with a strike to open piling early pressure onto fellow debutant Via. Via felt the pressure as Teece soaked in the atmosphere to record one of the biggest upsets in Weber Cup history.

Teece couldn’t have been happier with his day’s work: “I enjoyed myself. I got my emotions out of that game. I just went into the game with my own game plan. The advice I got was just to stay calm and repeat shots like I know I can do. I just had to bring all those emotions back. Especially when I throw a good shot, I love the crowd backing me up, I want them to make as much noise as humanly possible. The support we have here is incredible.”

Svensson was Europe’s shining light in 2020 and started off where he left off with the two highest scores of the night, firstly seeing off Kyle Troup 268-257 and then Barnes in the fans’ choice match where he delivered a second point inside the hour in a sublime night where he hit 15 strikes in 20 to assert his dominance. Svensson’s second victory against Troup was poignant with the pair close friends away from the lane but even more so given Troup’s PBA ranking list status as World No.1.

Barrett was happy with Europe’s day one efforts: “It was good, those pins haven’t typically fallen over in the past. We’ve learned from our mistakes and we are getting stronger every year. We have a good team and everybody got their feet wet and bowled well. Jesper saved the best until last.”

“It’s been good. The scoreboard reflects that. The main thing for us as a team is that we all bowled well. I started off ropey but I got there eventually. It was a great performance by Richie, Thomas was good last year and got the experience of the crowd for the first time. Stu is our Poulter and he will be our postman and deliver every match. Jesper is our anchor and he is the biggest part of our team.”

Day two of the Weber Cup gets underway from 6:00 pm live on Sky Sports in the UK, DAZN in the USA, and Viaplay in Scandanavia. See where you can watch the Weber Cup in your country here.