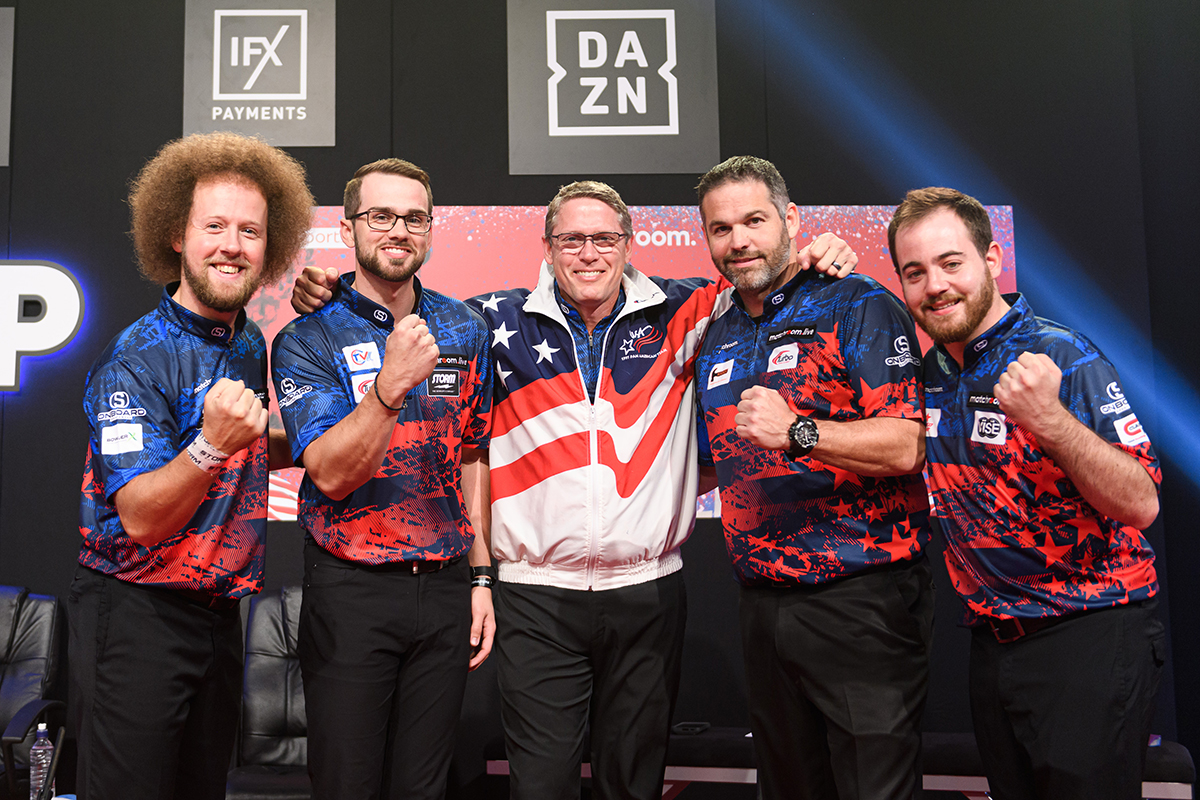 The USA rallied to a 6-2 session victory over Europe to assert their dominance on Europe for the first time and lead 9-7 overall going into the final day of the 2021 Weber Cup at the Morningside Arena, Leicester, live on Sky Sports in the UK, DAZN in the USA, and Viaplay across Scandinavia.

Europe started off the evening from where they finished last night with another Jesper Svensson victory as he overcame close friend Kyle Troup for the second time within 24 hours 235-197 with the hosts opting for the scimitar oil pattern in their first pick of the week.

Svensson was back out with Stuart Williams in the first doubles action of the evening against Chris Barnes and Troup where it was the American’s who stopped the Europe bounce of four on the trot 245-213. It didn’t start off the best for Europe after Williams and Svensson left an open frame which Troup soon made them pay for. Barnes had struggled so far but delivered the vital blow in the last frame to win it.

Williams beat Simonsen yesterday as Europe rallied but it was a different story on day two as it was Simonsen this time who came out on top to claim his first point of the week and continue the USA fightback. In truth, Williams had his chances early on though after Simonsen left it open in the third frame as the nine clung on.

It was left up to Thomas Larsen and Richard Teece to stem the USA flow against Barnes and Tom Daugherty and what’s that they did in emphatic fashion for Europe’s best showing of the session. Teece has thrived on the Weber Cup stage so far and with Larsen showed again why he got the nod by Dominic Barrett.

Simonsen bowled his first Weber 300 last year in Coventry and came within one frame of replicating it against Barrett to pull the USA just one away from Europe at 6-7. He admitted after the match that he had bowled better than last year’s 300 as he delivered the USA’s third point of the day.

The USA levelled for the first time since 3-3 at 7-7 with Simonsen and Chris Via dispatching Teece and Barrett after the Europeans left two frames in a row open to hand them the gap, they needed to take the point.

Debutant Daughterty has embraced the Weber Cup crowd like a duck to water and he put on a feast for them dominating against Svensson for a 289-256 win with nine strikes as the Rebel revelled in the moment and put the USA ahead for the first time since 3-2 yesterday.

Via is having a debut to remember so far, and he ensured the USA would go ahead into the last day of play beating Larsen 254-221.

Via said: “This year’s Weber Cup is really close. It’s a back-and-forth battle so we had some momentum going with a couple of wins going so I wanted to make sure I kept that going. I am trying to follow in his (fellow debutant Daugherty) footsteps. We’re settling each other down and we have good team chemistry. It’s an awesome team to be a part of and it makes it easier to throw those shots.”

On tomorrow: “It’s more of the same. We didn’t really bowl our best in the first session. This was much more like us. We’re going to keep doing what we’re doing and just being us. Hopefully, we will have a pep in our step and be ready to go again tomorrow. I think everyone wants to throw a strike to win a match in this environment and Weber Cup. It’s super exciting to bring a point home for your team.”

The final day of the Weber Cup gets underway from 12:00 pm with the afternoon session live on Sky Sports in the UK, DAZN in the USA, and Viaplay in Scandinavia. See where you can watch the Weber Cup in your country here.