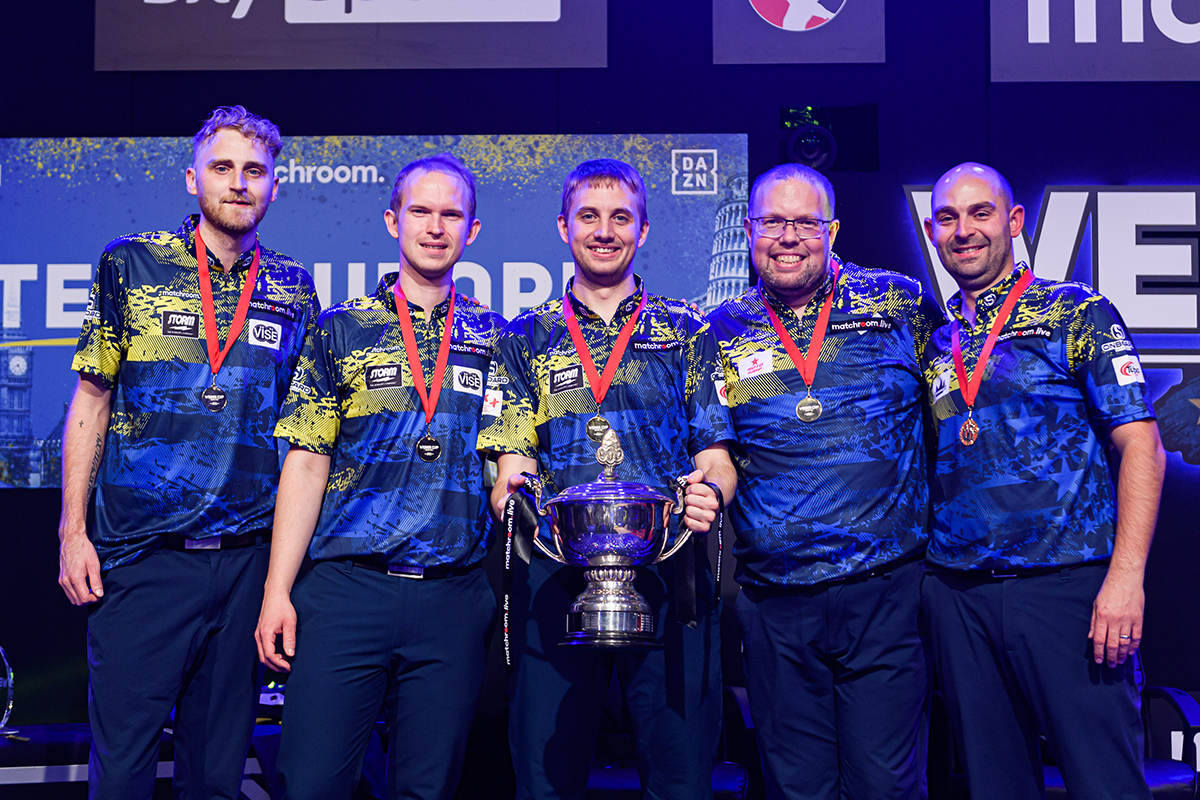 MIRACLE IN LEICESTER AS EUROPE BEAT THE USA 18-17

Leicester is the city of the underdogs, but nobody could quite predict what unfolded at the Morningside Arena, Leicester with Europe looking like they were down and out doing into the evening session.

The evening started with the penultimate doubles contest where Anthony Simonsen and Chris Barnes edged the USA closer to the finish line at 15-11 but that’s where the USA started to falter.

Thomas Larsen has grown into the week at his first Weber Cup with fans and squeezed past Tom Daugherty as the bowling gods looked down on him in a tight encounter. Larsen made a key spare in the sixth whilst Daugherty made an uncharacteristic shot in the seventh leaving Larsen on top. As it closed in, Larsen struck in the ninth to look like he would wrap up victory, late drama saw the Dane leave three standing after his first ball in the last frame but Daugherty failed to take advantage giving Europe a vital point at 12-15.

Jesper Svensson and Richard Teece formed a formidable duo to beat Kyle Troup and Chris Viaas the momentum swung from one side to the other.

Arguably the match of the tournament came when Williams clashed with good friend Barnes. In regulation, it finished in a tie forcing the first roll-off of the week. After two throws each, it was level at 60-60 going into the third frame where Williams made 19 meaning a strike would seal a win for Barnes and the USA. Barnes made nine too before missing what looked like a simple spare to give Williams a vital win 79-69 and reduce the gap to one frame.

Nine strikes from Chris Via sealed a convincing win over Jesper Svensson at 278-246 to put the USA back on track at 16-14. With momentum in the USA’s favour once again, Simonsen came up against a buoyed Teece who struggled early on allowing Simonsen in to put his side just one point away from retaining the Weber Cup.

Larsen replicated an earlier win over Daugherty by downing him for a second time in the session, this time 254-213 where it did seem like Larsen was struggling and Daugherty was ready to deliver the winning moment for the USA. At frame seven, Daugherty had the advantage and could bowl a maximum of 278 whilst Larsen could only make 265. It turned at this point with late mistakes opening the door for Larsen to claim another point and keep Europe in the hunt at 15-17.

Svensson bowled the MVP match against Simonsen with very little to separate the pair, so much so a roll-off was in order to settle matters after a draw in-game at 256 all. Simonsen bowled well all week but just couldn’t see it over the line as Europe rallied in front of a packed home crowd.

Europe went into the decider knowing they’d won both baker matches so far and with that mental advantage, they took their first leg up towards victory in the sixth frame. Troup left one pin hanging and from then on, Europe seized on it. Captain Barrett delivered when it mattered most with two strikes. Barrett’s opposite number Barnes faltered and it meant Svensson deservedly bowled the winning strike picking up the MVP trophy in the process.

Barrett: “Just look at these guys, as a team, unbelievable. These guys, the whole weekend have been unbelievable. Stu really got us started. Jesper is our backbone. What a debut for Richie. I don’t know how Thomas finds the heart and digs deep.”

“Hats off to the Americans they’re a fantastic team with great bowlers. I said before, they’re the hardest team we’ve ever played and I think that stands true. To come all this way and to be a part of this atmosphere, isn’t easy.”

Barnes: “I couldn’t be prouder of my team. They bowled great the whole time. Some fantastic moments and they gave us things to remember. We took advantage the last day and a half. It seemed every time we had the chance to put them away, we left a little sluther of a crack in the door and the Europeans walked straight through it. They came up big in every situation in the last 10 or 12 matches and they stole this one away. It was unbelievable how good they were down the stretch.”