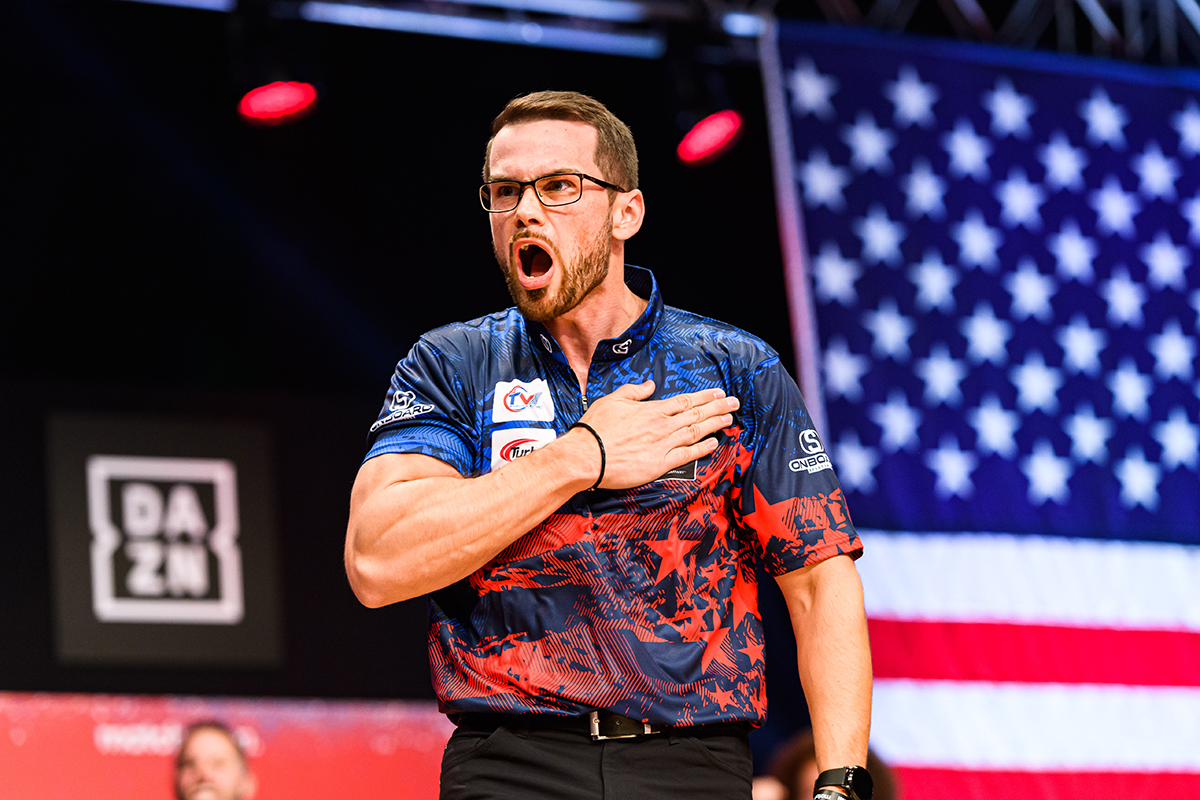 The USA are four points away from retaining the Weber Cup title for a fourth consecutive year after a pulsating afternoon of action to lead Europe 14-11 at the Morningside Arena, Leicester going into the final session.

Much like in the first baker match of the week on Thursday, the USA struggled to get out the blocks as Stuart Williams bowled the decisive strike to peg the USA back and put Europe one back.

Europe averaged 261 in the early encounters, but it didn’t prove to be enough against an imperious USA side that grew in confidence as the morning session went on with Richard Teece losing out to Tom Daugherty 266-255 as the two newcomers did battle.

Barrett was involved in a slog of a match against Chris Via taking it to the last frame by a single point where it was the latter who dealt the blow of eight consecutive strikes to give the USA victory 268-267 and create a three-point advantage for the first time in the USA’s favour.

Thomas Larsen struggled in the double’s encounter with the Dane leaving plenty of spares or open frames on the lane with Jesper Svensson having to pick up the pieces. When it got to the fifth frame, the USA rallied with Daugherty and Kyle Troup whilst Larsen still struggled, leaving an awkward split for his counterpart to deal with. It was a scrappy affair but in the end the contest swung firmly towards the USA as they opened a four-point lead 235-213.

The captain’s match between Dominic Barrett and Chris Barnes saw a battle of the two Weber Cup veterans as Barnes lead from the front for the Americans to seal their fourth win of the session at 255-235. Barrett had his moments, but Barnes kept the pressure on to deliver another point for the USA.

There needed to be a turning point for Europe as the USA gathered momentum and it was provided by Williams who faced off with Anthony Simonsen for the third time in as many days in what was his best and Europe’s best performance of the week so far when they needed it most.

With the USA tide stemmed, Larsen went out searching for his first point of the 2021 Weber Cup against Troup who was also looking for that elusive first point for his team. Larsen has struggled in recent matches on the lane but bowled the shot of the tournament so far in the fourth sending a messenger to get the split and make Troup feel the heat. Troup was left frustrated in the seventh frame when he left it open and despite having the chance to level in the eighth, Larsen pulled away to secure another European point and leave them trailing by three.

Svensson has been Barrett’s go-to when he needs a big performance, and he took on Simonsen knowing the USA had their tails up. Simonsen reinstated the four-point advantage with a 256-244 win for his third singles victory of the week.

When it came to the last match of the session Williams and Teece united against Barnes and Via to put in a clutch performance where Teece held his nerve to bowl the strike and make it 256-244 meaning the USA have a three-point lead going into the last session.

The final session of the 2021 Weber Cup gets underway from 6:00 pm live on Sky Sports in the UK, DAZN in the USA, and Viaplay in Scandinavia. See where you can watch the Weber Cup in your country here.

MIRACLE IN LEICESTER AS EUROPE BEAT THE USA 18-17