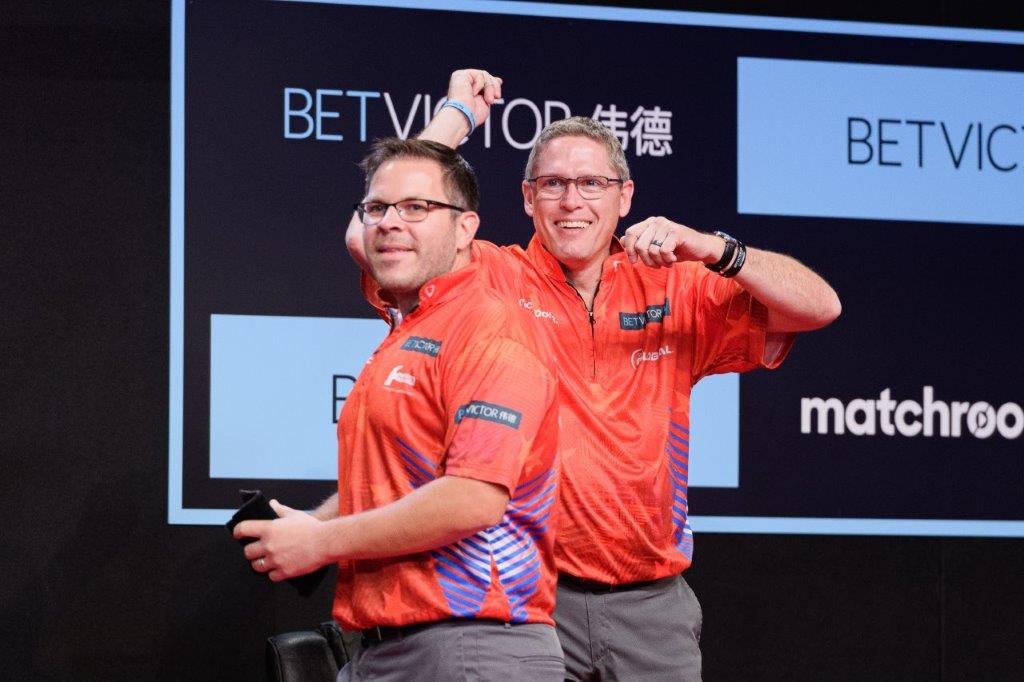 Team USA continued their BetVictor Weber Cup dominance on Monday evening, extending their tournament lead to 10-3 at the end of day one, despite the efforts of Europe’s Jesper Svensson.

Svensson has been involved in all three of Europe’s wins so far, but his team-mates struggled around him as defending champions USA took a commanding lead in the annual transatlantic tenpin tussle, being staged this year behind closed doors at Ricoh Arena, Coventry, but broadcast live on Sky Sports, DAZN and Matchroom.Live.

After a brilliant 6-1 opening session, USA carried their momentum into the evening session with Captain Chris Barnes leading from the front with a 254-243 win over European rookie Thomas Larsen.

O’Neill was next out for America, facing European stalwart Stuart Williams. Both started strongly, but the wheels came off for ‘Beef Stu’ in the sixth, leaving the first of three open frames to lose 256-202 and see Europe go 8-1 down.

Denmark’s Larsen and Sweden’s Svensson gave Europe something to shout about in the third match of the evening session, dominating the US duo of Barnes and Anthony Simonsen for a 278-217 win.

“We have got to dig deep,” said Svensson. “As a team we need to perform better, we are nowhere near as good as we need to be, but I am glad me and Thomas could bowl a really good game. We both had a really good bowling action and it is the start of something that could be a comeback if the other guys can get going as well.

“We have to keep believing, there are a lot of games to go, but we need to perform better to have a chance.”

Captain Barrett, though, wasn’t able to heed that message, leaving three open frames as he laboured against Troup. The American, MVP in 2018, himself left two open frames after bad splits but still added to USA’s points tally with a 236-203 victory.

“It felt great, especially how tricky that lane was,” said Troup. “The front part of the lane was hooking extremely early and it felt good to settle in, trust my process, and make two good shots down the stretch.”

Troup remained at the lane for the final two matches of the session. He was joined by EJ Tackett for a doubles match against Williams and Palermaa, and USA opened up an eight-point advantage with a 221-257 victory for a 10-8 BetVictor Weber Cup lead.

The Fans’ Choice match was next, with Troup getting the American vote and Svensson get the nod for Europe. The Swede would probably also have been the European team’s own choice having been involved in their only two points so far, and Svensson gave his team a slim glimmer of hope with a victory over his PBA Tour roommate, meaning the day ended with USA 10-3 ahead.

“We did very well on the pattern we picked and then came out slighty ahead in the second session on the pattern they picked,” said USA captain Barnes at the end of the day’s play. “Our guys are firing off pretty good and everybody is comfortable. The guys looking for redemption certainly had a fair amount of it today.”

European captain Barrett said: “They were just too good today. They are the best bowlers in the world, the most in form. I think I have let the team down quite badly, I think Stu has a lot to do going into the rest of the event too. The first couple of points we played with Thomas didn’t go too well. It was similar for Osku, he struggled early, but we will see a lot more of Osku tomorrow. Thank goodness we have Jesper.”

The 2020 BetVictor Weber Cup continues from 1pm (UK time) on Tuesday behind closed doors at Ricoh Arena, Coventry. Fans can get involved by taking part in the Fans’ Choice vote and submitting videos and pictures to be used on the big screens at this year’s BetVictor Weber Cup.