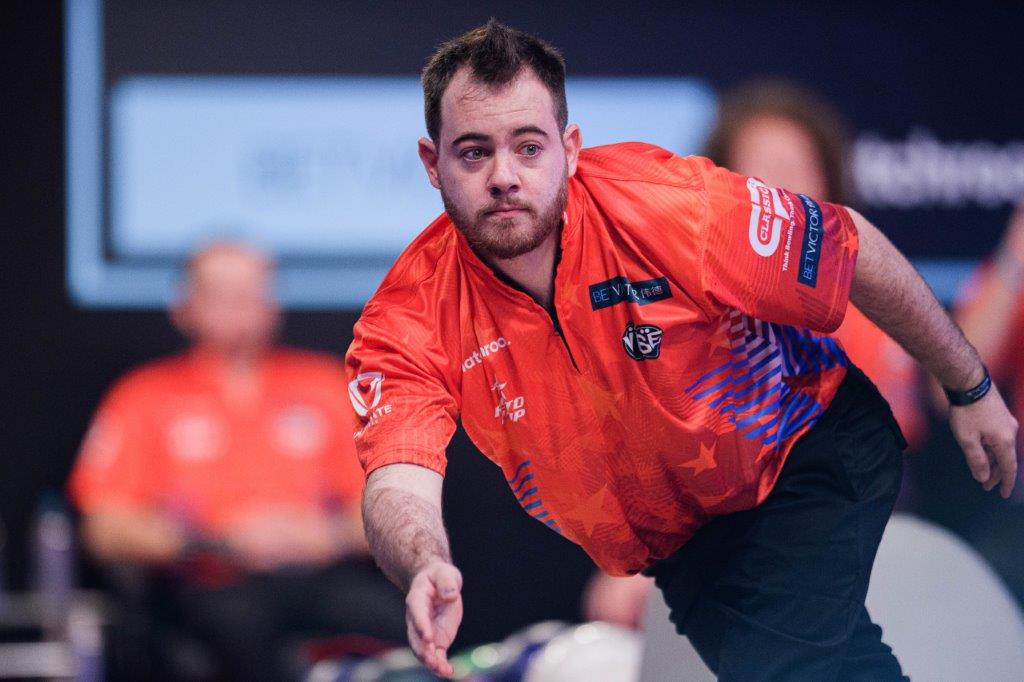 Both teams took three points from Tuesday afternoon’s session, and there were positives for Europe, especially in the performances of Jesper Svensson, Osku Palermaa and rookie Thomas Larsen.

American started on the front foot yet again, Anthony Simonsen showing exactly the form which saw him crowned MVP last year with a 278 to defeat Palermaa 265.

Larsen, who looked comfortable alongside Jesper Svensson in doubles on Monday evening, then continued his confident start with a 288 to beat EJ Tackett in the tenth frame of the day’s second match.

“EJ looked pretty unbeatable through the whole game and when I missed the first time I thought that would be it, but he threw a bad one, game me a chance and luckily I was able to take advantage of that,” said Larsen.

“It was part of our game plan for Osku to bowl the first match so I could have a good look. Osku bowled a great game and could easily have won so we just need some breaks to go our way.”

The third match saw Larsen stay on the lane, where he was joined by Dominic Barrett for a doubles clash with Simonsen and Tackett. Europe looked locked in early, but Barrett struggled in the second half of the match and USA were able to tie at 244-244 to force the roll-off. All four bowlers made strikes but when Barrett left three pins standing with his second roll-off ball, Simonsen stepped up and took full advantage, striking to give USA the win which halted any European momentum which may have been building.

Match four brought the tournament’s third roll-off, this time Svensson tying 267-267 with O’Neill and when the American left two pins standing with the second roll-off ball, the Swede swooped for a European point.

It was another false dawn for the hosts, however. The first frame of the next match saw Barrett and Williams leave an open frame against Troup and Barnes, and their struggles continued throughout the match, USA eventually taking the point 254-210.

“We did take advantage of opportunity there,” said Barnes. “We were a little shaky and there a lot of moves going on but our experience playing together in the last couple of years certainly helped us there.”

The sixth and final match of the session was the Fans’ Choice doubles match, and the online vote pitched Palermaa and Svensson against Troup and Simonsen, and the European duo stepped up with a crucial 279-278 victory, Palermaa holding his nerve to bowl the final strike and secure a 3-3 session and ensure the deficit was cut to 13-6.

The 2020 BetVictor Weber Cup continues from 6pm (UK time) on Tuesday behind closed doors at Ricoh Arena, Coventry. Fans can get involved by taking part in the Fans’ Choice vote and submitting videos and pictures to be used on the big screens at this year’s BetVictor Weber Cup.