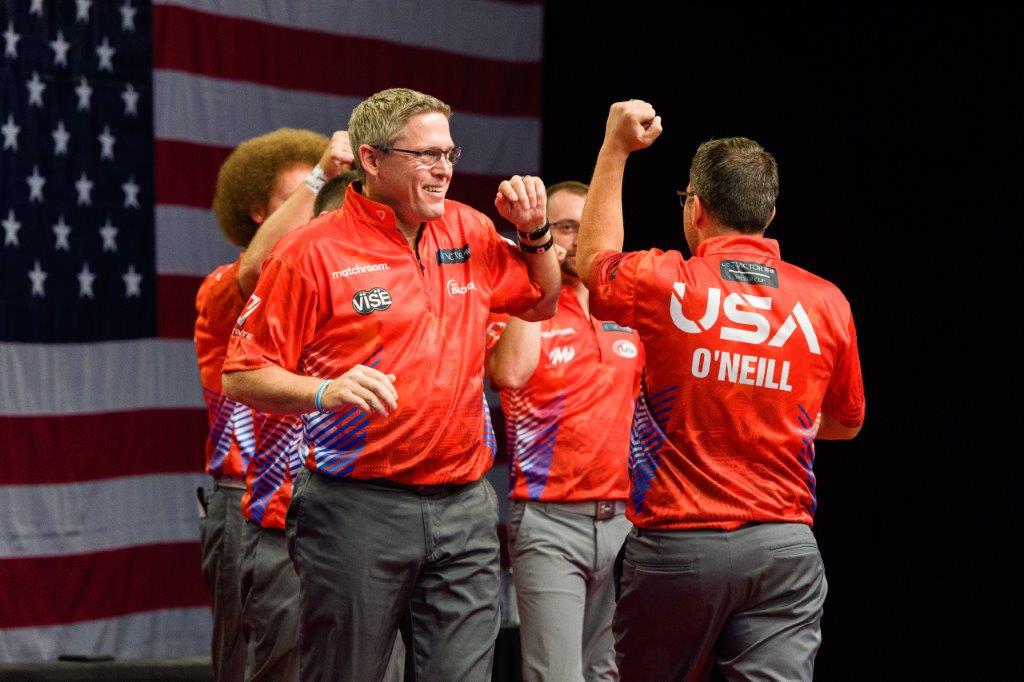 Team USA dominated the opening session of the BetVictor Weber Cup, storming to a 6-1 lead over Team Europe, live on Sky Sports Main Event. Jesper Svensson won the final match of the session on a roll-off against EJ Tackett to spare Europe an embarrassing whitewash.

The hosts had warned of the cost of the slow start they suffered in Las Vegas last year, but only fell four points behind in 2019, a deficit they could not recover from. This time the damage is deeper, but in a race to 23 there is still much work for USA to do if they are to defend their title at the Ricoh Arena in Coventry.

Europe had a far from ideal start; rookie Thomas Larsen leaving the third frame open before Osku Palermaa did the same in the sixth of the Baker match. That gave USA some breathing room in the tournament opener, but they barely needed it as the defending champions took the first point 267-212.

The next match was a battle of the two automatic qualifiers; Jesper Svensson and Bill O’Neill had been their continent’s highest-ranked bowlers on the 2020 PBA Tour Points List.

‘Real Deal’ O’Neill last bowled at the BetVictor Weber Cup in 2015 and struggled both that year and the year before. In his opening match of this year’s event, though, he had none of those issues. Svensson had a perfect first half of the match but four consecutive spares from the sixth reduced his score to 255, while O’Neill took the point with 268.

“That was a really big game for us,” said O’Neill as USA took a 2-0 lead. “I know it’s really early but it’s a big game for me mentally and for us going up against arguably their best player. So to come out with the win and the way that I did, I’m really happy.”

O’Neill was then joined on the lane by another bowler looking for Weber Cup redemption, EJ Tackett, and they bowled nine strikes out of ten to finish with 289 to beat Dominic Barrett and Jesper Svensson, who bowled 254.

At 3-0 down, the pressure was piled on Osku Palermaa, who started slowly at last year’s Weber Cup but needed to dig Europe out of an early hole against Kyle Troup.

But the Finnish bowler was struggling to get comfortable on the lane and could only amass 192, while Troup, who switched balls after the first two frames, finished on 255 to guarantee the session would be won by USA.

Captain Barrett was next out for Europe but a 246 wasn’t enough to beat Anthony Simonsen’s 268; the Texan showing no signs of the jetlag he’d been suffering since arriving in the UK on Friday.

“There was a lot of expectation on me as MVP but throughout the practice sessions I haven’t really felt that comfortable,” said Simonsen after the match. “I’m not really a practice guy but once I got a bit of adrenaline going through me, the jetlag kind of settled down a little bit and I was fortunate enough to bowl a good game.”

A 268-240 doubles win for O’Neill and Chris Barnes over Williams and Larsen took USA to a commanding 6-0 lead, and a chance to make history with an unprecedent 7-0 first session win should Tackett beat Svensson in the closing match of the afternoon.

And the American looked set to make it seventh heaven but he left the 9-pin in the final frame, allowing Svensson to strike and force a roll-off. Both bowlers made strikes with their first roll-off ball, but Tackett couldn’t repeat with his second and Svensson got Europe on the board with a 60-39 roll-off win.

The 2020 BetVictor Weber Cup continues from 6pm (UK time) on Monday evening, running until Wednesday, October 21 behind closed doors at Ricoh Arena, Coventry. Fans can get involved by taking part in the Fans’ Choice votes and submitting your videos and pictures to be used on the big screens at this year’s BetVictor Weber Cup.