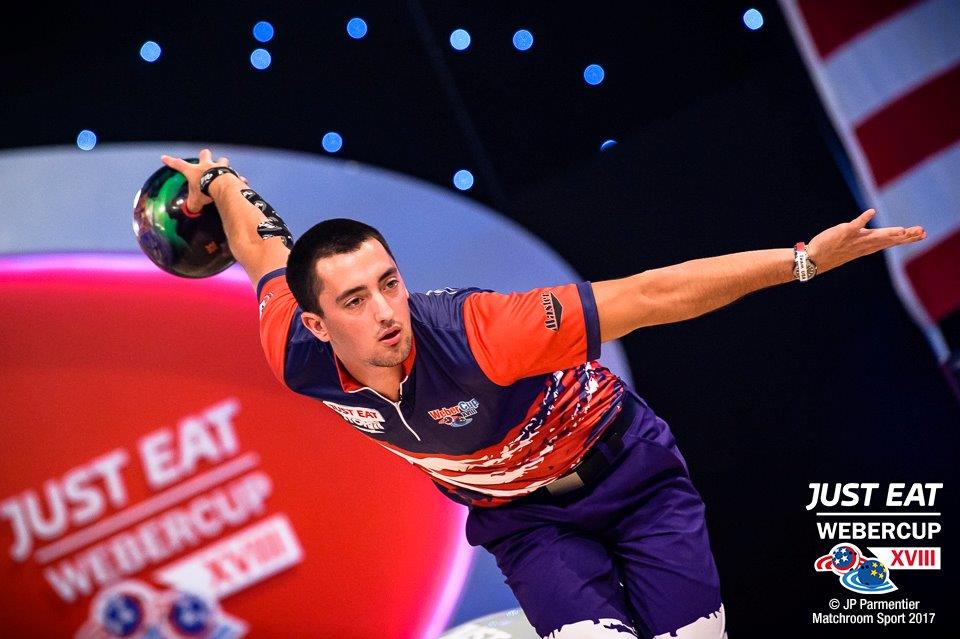 TEAM USA is on track to regain the Just Eat Weber Cup winning the second session by the same scoreline as last night – 4-3 – to increase their overall lead to 8-6 after two of the five sessions at the Barnsley Metrodome. Captain Sean Rash limited himself to just the one match, but marshalled his troops well as they enjoyed three successive wins in the earlier part of the session.

Player of the afternoon was America’s Kyle Troup who helped end Jesper Svensson’s unbeaten run in the competition, and then inflicted another defeat on the Swede in singles play by a whopping 53 pins. That took the score to 6-4 in favour of the Americans after Dom Barrett had earlier defeated EJ Tackett to square the match up.

Troup had enjoyed some verbals with Svensson prior to their singles match and was fired up from the start, “I knew I had to bring my A-game against Jesper, he is one of the toughest opponents I have ever seen. I threw some really good shots in that game and kept telling myself to stay aggressive. I was staying in the moment and not really looking at the score, just trying to throw a strike every frame and stay on top. My game feels really good right now and my confidence is really high right now. My team-mates can see my confidence and hopefully that will filter down to them.”

The Americans extended their lead to three points as Rash and Kent despatched Larsen and Williams to leave the Europeans looking adrift. It was at this point that Dom Barrett had some strong words with his team which seemed to take effect.

Stu Williams responded with a hard fought albeit scrappy win over Kent before the Swedish pairing of Svensson and Larsen won the penultimate match, to leave themselves one point away from the Americans with one match to play.

Larsen though could never get going against the excellent Marshall Kent who pulled away to restore the United States two-point lead at the close of session two.

Commented Kent, “After a good start, I got a little shaky with my shot making but I spoke to Sean and EJ and came up with a game plan for the last match.

“Winning the last match was huge. If I lose its tied but now we have a two-point lead and we won the session. We have won two out of two sessions now and if we win them all then we win the Cup.”

Williams reflected on his team’s resurgence, “We were in a pretty awkward situation and we had to win two of the last three games to keep ourselves on track. The lane is starting to break down a little bit more and it is a lot more challenging than the lane USA picked last night. The is usually good for us but we haven’t bowled well enough.

“I live in America, trust me, you can never silence an American. I am in the same boat and I will come out fighting. I reminded Marshall after our match that he has a long session and once you start to lose it’s pretty easy to keep losing.”

Captain Sean Rash summed up his team’s game plan; “The goal was to win every session. It got a little tricky towards the end, Marshall struggled in his second and third games but he was a little more determined and more focussed in the last match and made some really good shots.

“I have 100 percent confidence in every guy who is here right now – they know how to bowl, they are big boys and they can fill the frames.”

Dom Barrett countered, “I feel like we aren’t firing on all cylinders yet but we aren’t far away, we a pretty close. In that session, we got through it. Jesper lost his first ever match which means that pressure of being undefeated is out of the way and he can go back to winning again. We have started to figure some stuff out in that session, we weren’t far away and in the next couple of sessions you’ll see a much better Europe.”