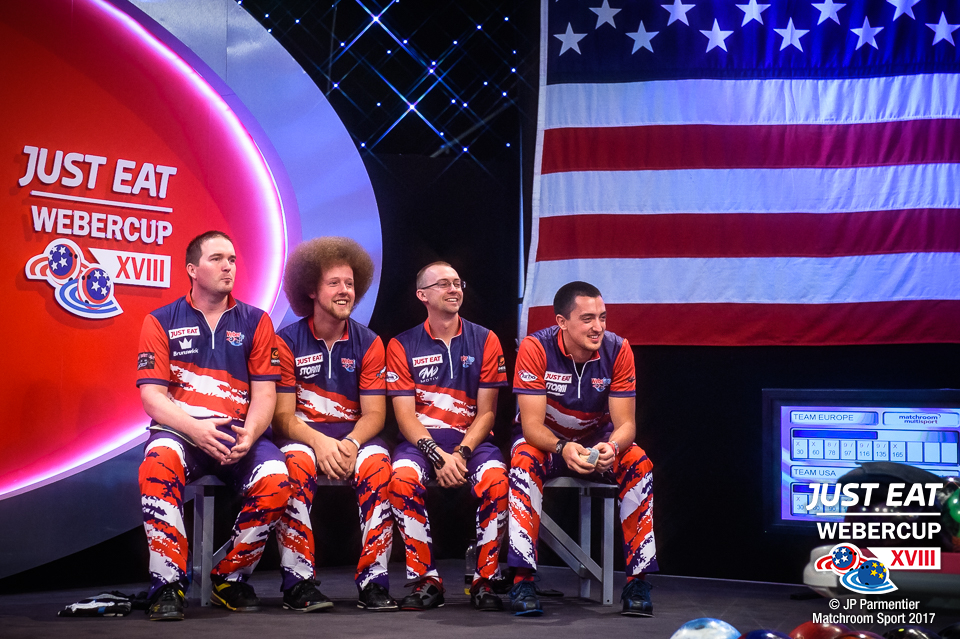 AFTER LAST year’s hiding at the hands of Team Europe, the American side restored some pride as they took the opening session of the 2017 Just Eat Weber Cup at the Barnsley Metrodome. The new look team, captained by debutant Sean Rash, started out strong as they lead 2-0 and then 4-1 but the session ended 4-3 as Jesper Svensson, unbeaten in his debut last year, won his two singles matches to restore European fortunes.

American’s Marshall Kent and Kyle Troup had made their debuts last year but Rash and PBA World Champion EJ Tackett were new to the Weber Cup but they slotted in nicely as the Americans won the opening Baker match, accumulating a huge 289 pins.

Kyle Troup with his unique look, capitalised on a weak showing from Euro skipper Dom Barrett, winning by 46 pins to give the USA a two-point lead. Svensson though, dispatched EJ Tackett to pull one back before captain Rash beat Martin Larsen by just three pins.

A slick-looking Marshall Kent restored the two-point lead as he eased past Stu Williams before Svensson once again hammered the pins to record the joint best score of the day – 289 – as he beat Kyle Troup. The final match was ‘captain’s pick’ as each of the skippers chose the other side’s man and it ended up being Barrett vs Rash as they both opted for the other.

Barrett picked up the pace from his earlier match as he ran out a 40-pin winner over Rash to see the overall score finish at 4-3. The total pin fall reflected the closeness of the session as the USA had the slight upper hand at 1831-1817 with the averages at 262-260.

Commented defending skipper Dominic Barrett, “We will take 4-3 after that with the way they started. They struck the first 17 out of 20 shots and continued that for the next couple of matches. We had Jesper to come in and make it 2-1 but they kept striking after that. For us, it’s about finding our feet a little bit and getting our way into the event, even though we have had fast starts the last couple of years.

“I choose Sean for the final match, it was a little bit of lane play but it was because Kyle had just come off the lane so we didn’t want to pick him, Marshall bowled really well the game before Kyle so it wasn’t going to be him. Sean probably bowled better than EJ but EJ is Player of the Year.

“I have been through enough Weber Cups to have felt all the emotions session to session and this one doesn’t feel too bad. We are only down a point – it felt like it could have been a lot worse but Jesper stepped up and bowled great and we managed to get the point in the Captain’s Pick at the end. It could have been 6-1 or 5-2 and though I won’t say we are the happier of the two camps we are happy to keep it that close and tomorrow we get to pick the pattern.”

Rash was upbeat about his team’s success, despite the two late defeats; “It was really disappointing to lose those last two matches but they brought out their lucky charm, Jesper, who is bowling extremely well and then my match with Dom could have gone either way, but he bowled well.

“The momentum is still with us because we are ahead. I told our guys we will be bowling until late on Sunday night so it will be a battle back and forth but we got off to a good start and tomorrow will be more electric and more fun.

“The Europeans didn’t seem too nervous for the start but they were a little slow to start and we got our big hits early and took that lead, 4-1. But there is so much bowling to come.

“They get to pick the pattern tomorrow and I have a pretty good idea what they pick; the pattern they dominated on last year. But our guys our bowling extremely well with a lot of fire under us and we’re having a good time.”
Play continues tomorrow at 12.30 with three doubles and two singles matches.