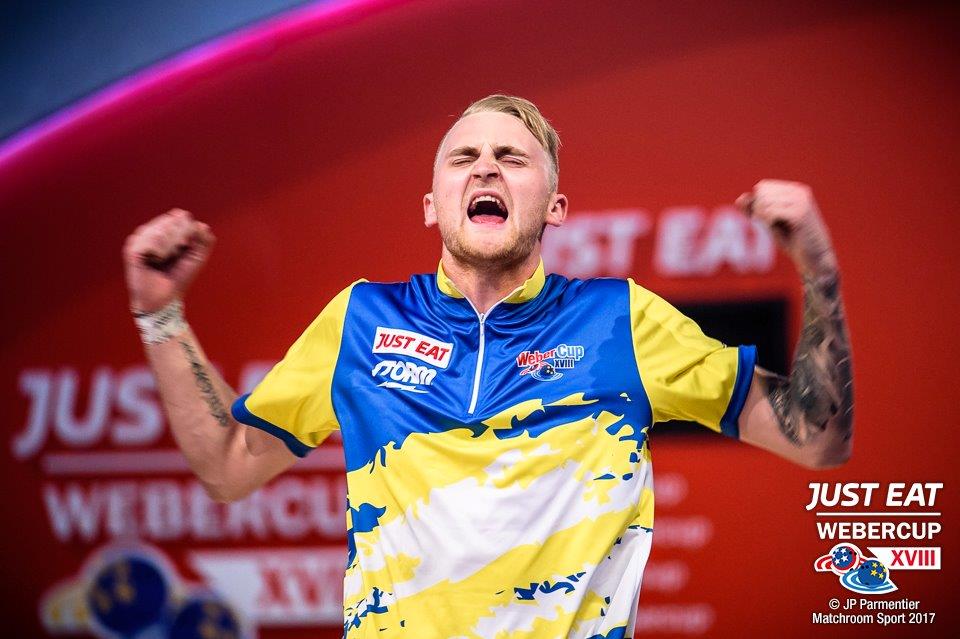 TEAM EUROPE fought back to dominate the Saturday evening session as they took the lead for the first time at the 2017 Just Eat Weber Cup. Taking place at the Metrodome Arena in Barnsley, Europe had lost the opening two sessions 4-3 to take a 6-8 deficit into the third session, but they then turned on the power to send the Americans lurching onto the back foot.

Getting off to a fantastic start – recording a huge 286 in the opening Baker – they then sent out Stu Williams who derailed the in-form Kyle Troup to draw things level at eight matches apiece. In the next, EJ Tackett finally got his act together as he beat Jesper Svensson by 17 pins to restore the USA lead, but the next three matches proved disastrous for the USA.

First Dom Barrett hammered Sean Rash – 54 pins being the winning margin – then Martin Larsen got the better of Marshall Kent in a tight match. Finally, Jesper Svensson fell over the line against Tackett in the second lowest scoring round of the tournament.

That opened up a two-point lead for the Europeans with the captains’ pick to come. Once again, Dom Barrett opted for his opposing number Sean Rash while Rash picked Martin Larsen despite the Swede delivering a 277 game earlier in the evening,

It all went down to the final roll as Rash need to strike in the tenth frame to take the game. Under real pressure, he did just that and closed the deficit to just one point with all to play for on Sunday.

Commented Rash, “That last point keeps it close. We were up one, up two but then they got some momentum and got some points. It is always nice to win the last match of the session so the guys are happy, I am happy and we move on to tomorrow.

“The one shot in the baker from Marshall really changed things because we could have been up three and it really gave them some life and they went on to win a couple of points after that. It’s 11-10, who knows how many matches there will be tomorrow but we are going to have some fun.”

Euro skipper Dom Barrett responded, “This is my tenth Weber Cup and everyone has been different. They have all had a different dynamic and a different way it pans out but what I do notice is you need to play yourself into the event and that is exactly what we have done.

“You have seen a bit of our experience in play today. We weren’t really quite there in the afternoon session but we only lost the session by one and then in the evening session you saw exactly how well we can bowl.

“This lane is so unique in so many ways and we know what this lane plays like, regardless of the oil patterns on it. We had a good chat about why they were beating us and why weren’t playing very well. It was pretty in depth but we figured things out, tried to use what we have learnt in previous years to find a way and to find ball reaction.

“This is the first Saturday night which I felt was already like a Sunday. That’s a credit to the US team because they have come out firing and we have felt the pressure.”