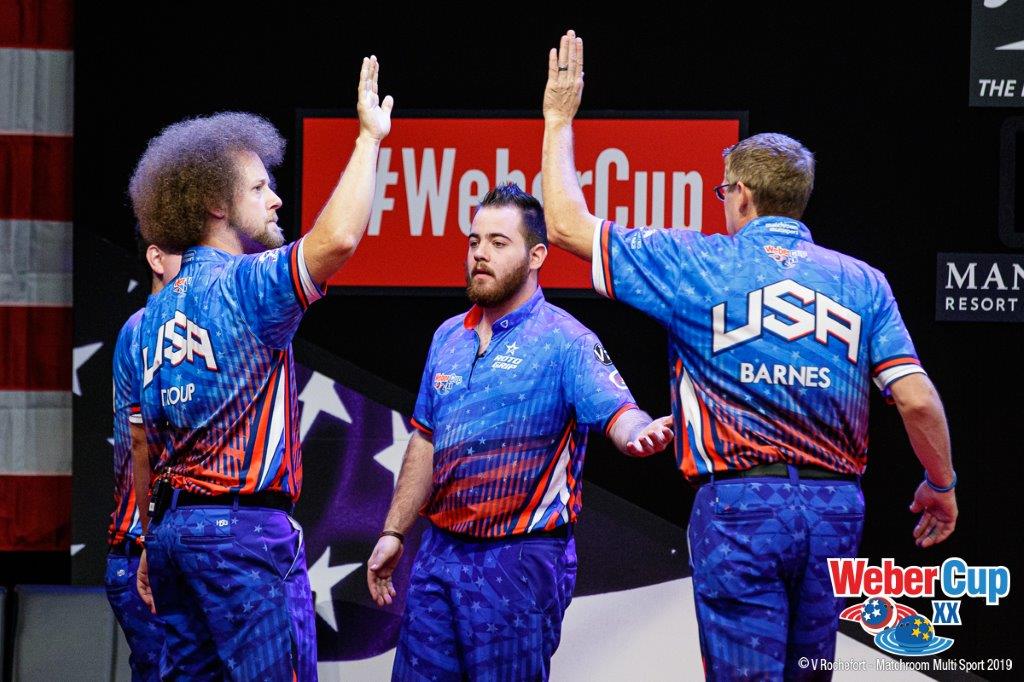 USA took a huge stride towards defending their Weber Cup title as they extended their tournament lead over Europe to 14-9 at the end of day three at Mandalay Bay Resort and Casino Convention Center, Las Vegas.
The hosts need just four more points to lift the famous trophy for a tenth time, and viewers tuning in on Sky Sports, DAZN and networks around the world were treated to another session of intense transatlantic tenpin action.

Europe have it all to do and showed fight early on day three, but ultimately it was the hosts who thrived in front of their vocal home support in Vegas.

The team captains met for a third time in the tournament at the start of the session, but Dominic Barrett struggled to find the pocket for Europe and made just three strikes as he laboured to 188. Chris Barnes, however, was straight out of the blocks and four strikes to open the match meant USA had made 20 consecutive strikes. He bowled a 234 to assert America’s authority on the tournament.

Stuart Williams wasn’t going to allow Europe to go down without a fight, however, and the Englishman who has been so synonymous with his continent’s success on this lane stepped up with a dominating performance just when his team needed it most. His opponent Anthony Simonsen struggled to find his look, but Beef Stu had no such issues. Two nine spares in the later half of the match reduced his score but 267 beat 242 to take Europe to seven points.

“One point isn’t going to turn this around, but it is building blocks and that was the first one,” said Williams. “I had to take a deep breath before that match because Anthony is a great bowler. I was super comfortable there and he was super uncomfortable, and he still managed to make it close, which shows how good he is.

“Simonsen has been great this week but a lot of his wins have been against Jesper Svensson and when he plays a leftie, he has one side of the lane to himself. We wanted to see if having him against a right hander would change things for us.”

Svensson then followed his team-mate’s lead and won his first singles match of the week, a 243-212 over Jakob Butturff. Williams returned to the lane next for Europe but couldn’t bring his form from earlier in the day as he faced Barnes.

The American captain wanted to stem Europe’s momentum and did just that, bowling a 246 as Williams struggled. The Englishman tried a number of different balls but couldn’t get comfortable at the lane and ended on 176.

Europe’s struggles continued as Williams’ compatriot Barrett, though better than in the session opener, couldn’t keep up with the unrelenting pace of Kyle Troup. The ‘Fro spared in the first frame but from there made eight strikes for a 278. As USA moved 13-8 ahead, Troup turned to rally the crowd and it was a performance that also rallied his team.

Simonsen was next up for the hosts and this time American fans saw the version of Simonsen who has been so good on the Weber Cup lane since his debut last summer. Some unfortunate spares kept his score to 254, but it was enough for the point as Palermaa bowled a 220.

The European captain ended the day on a positive note for his team, giving them hope ahead of the final day. Barrett’s 241-229 victory over Butturff means USA still need to win four matches to lift the Weber Cup, and Europe have experience of overturning such deficits in this arena.

“We couldn’t lose that match,” said Barrett. “At the moment I have a good record against Jakob from the US Open until now, I know he will break that eventually, but it was nice to keep him there for now. We have come back like this before. Tomorrow we need to bowl really well and see what happens.”

American captain Barnes said: “History would say it is possible that they can catch us but we are well aware of that history and there won’t be any letting up or lack of focus. We know what has to be done and we will be trying to get there as early as possible.”

Weber Cup XX concludes at Mandalay Bay Resort, Las Vegas tomorrow with play commencing at 11am. The Weber Cup is sponsored by Storm, the Official Bowling Partner of the Weber Cup.