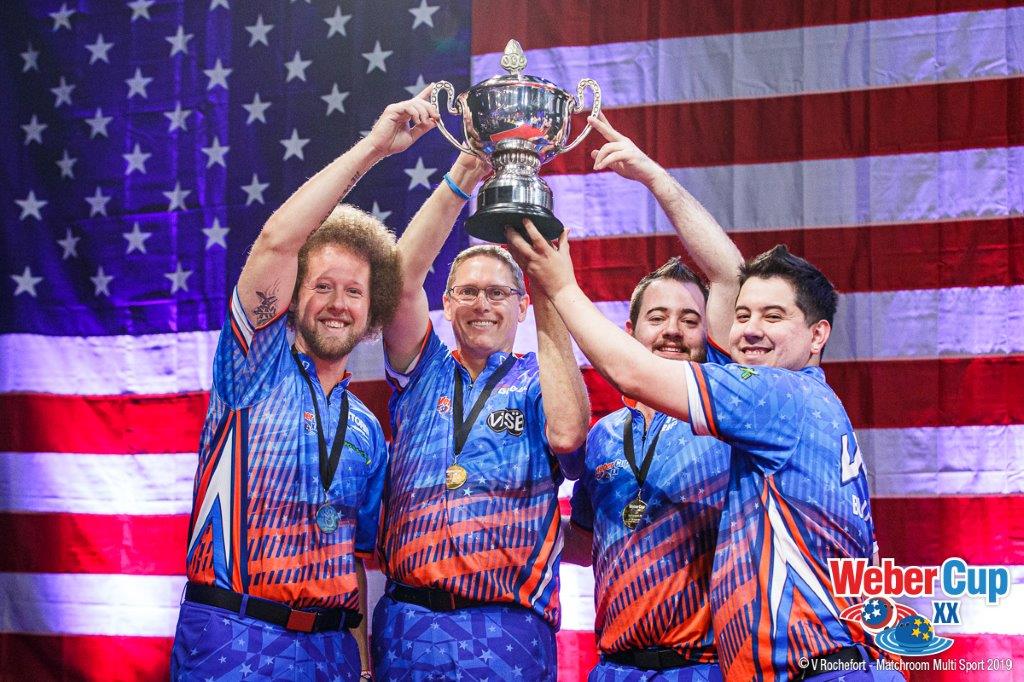 Anthony Simonsen was the MVP and fittingly bowled the winning match, a 287 to beat Stuart Williams’ 278 in one of the best matches of the tournament. The win means USA, captained by Chris Barnes, have now won ten Weber Cups – the same number as Europe.

After Tuesday’s first session was tied, America opened up a four-point lead on day two and though Europe made them wait on the final day, the hosts collected the final four wins they needed to lift the trophy again.

“The team bowled fantastic,” said USA captain Barnes. “These guys strike more than anybody on the planet and once again Anthony Simonsen showed what it is all about when it matters the most.

“The crowd was great this week. We didn’t know what to expect and I think the crowd had a lot to do with some of the momentum we carried during the first couple of days, we couldn’t have done it without them.”

USA brought a five-point lead into the final day, but Europe pulled one back immediately as Stuart Williams and Osku Palermaa bowled 289 to defeat Kyle Troup and Chris Barnes.

Troup and Williams stayed at the lane for singles and in a gripping, high-quality match USA edged a point closer to glory. Williams had been perfect in the preceding doubles match but left the sixth frame open and didn’t get the luck he may have hoped for with messengers on more than one occasion. Troup had tuned into his game since the first fixture and a four-pack at the end of the match saw him take the match 267-245.

Dominic Barrett and Jesper Svensson then took another point for Europe after a doubles clash with Anthony Simonsen and Jakob Butturff, but the American captain Barnes responded with a fantastic 288 to beat Palermaa in match four. He opened with an eight spare but was faultless from there on in to record the highest individual score of the week.

The visitors responded with a fine doubles display from Svensson and Williams, who saw off Troup and Simonsen. But Svensson couldn’t carry his momentum into his singles match against Simonsen, and once again the Texan had the Swede’s number – a theme in this Weber Cup and the last – and USA needed just one more point for the Cup.

The oil was then changed, with the 39ft Sabre pattern drawn at random to replace the longer Shamshir. The next match saw Barnes against Palermaa, with the Finn still looking for his first singles win of the week. The American captain struggled to adapt to the new, short pattern, while Palermaa found his look early and kept Europe alive with a 255.

The captain was next out for the challengers, against American rookie Jakob Butturff. Before the match Barrett reminded his opponent of their US Open final match at the end of last year, when the Englishman took home the major title. The result was the same this time and USA were made to wait a bit longer.

The wait, though, lasted just one more match as Simonsen stepped up and bowled an incredible match, a seven spare in the ninth denying him a perfect match. To his credit, Williams kept up with the pace despite opening with a spare. A second spare for the Englishman came in the seventh and needing a strike for victory, Simonsen held his nerve to the delight of his team-mates and the fans in attendance at Mandalay Bay.

“I don’t know if I have had a more exciting match that I have been a part of,”said Simonsen. “I knew going against Stu that he would be trying to get the crowd going and if we didn’t win then the crowd would be hyped up and who knows what would have happened.”

European captain Barrett reflected: “We fight all the way, try our best, show heart and character and that is what we did. But hats off to the American team, as individuals they came together as a team and bowled way better than we did. We bowled well today but we didn’t bring our best on the first couple of days and that was the difference. They thoroughly deserve it, so congratulations to Team USA.”

The Weber Cup is sponsored by Storm, Official Bowling Partner of the Weber Cup. The 2020 Weber Cup will take place at Morningside Arena, Leicester from Friday, June 5 until Sunday, June 7. Full ticket details will be announced soon and fans can sign up to receive ticket alerts at www.webercup.com.