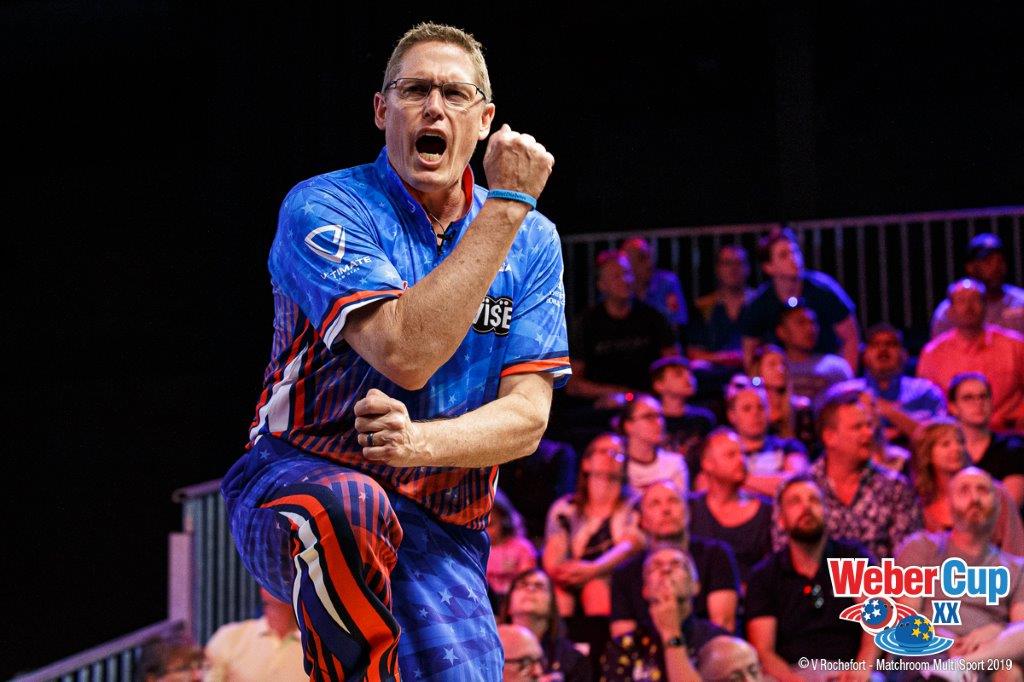 Team USA bowled the first ever Weber Cup baker 300 as they took a 10-6 lead over Europe at the Mandalay Bay Resort and Casino Convention Center, Las Vegas on Wednesday.

America dominated the second day of play, winning six of the eight matches and they completed a memorable session in style with the first perfect team game in the tournament’s history.

The session began with last year’s MVP Kyle Troup in action against Osku Palermaa, who is making his first Weber Cup appearance since 2015. The Finnish star looked to have found his groove early with a nine spare and three turkeys, but then struggled for the rest of the match with a strike in the seventh his only maximum. Two open frames contributed to a score of 201, while Troup excited the crowd with a great performance as he scored 278 to get USA’s fifth point on the board.

Palermaa, though, was able to find some confidence in the second match and converted a match-winning spare to draw Europe level again.

The day’s third clash was a repeat of Tuesday’s Fans’ Choice fixture; a meeting of the two captains. Yesterday it was Dominic Barrett who prevailed but on this occasion, despite a strong start for the European, it was Chris Barnes who took the point.

“I didn’t expect to have the greatest ball reaction so didn’t set myself up to bowl a whole lot today but I had pretty good luck there,” said Barnes. “It was time for some redemption because I had given away two points.”

Europe again hit back immediately, the pairing of Palermaa and Jesper Svensson benefitting from a Jakob Butturff blip as the rookie failed to strike in frames four and five while partnering Troup.
Despite his doubles win, Svensson continued to struggle to get to grips with the lane and in the following singles match fell victim to Butturff, who picked up his first point of the tournament with a 278 to beat Svensson’s 235.

A gripping doubles match followed, as Barnes and Anthony Simonsen for USA and Barrett and Stuart Williams for Europe went to the wire, and then some. Having clawed back from behind, the European pair entered the tenth frame level. Barnes made a strike and Barrett responded with the same to force the roll-off. USA were perfect with two strikes, but Europe’s spare in their first roll-off bowl meant the point went to the hosts, who received a huge roar of approval from their home crowd.

A repeat of the day’s opening match was next up, but two wins since the earlier loss had clearly done a lot for Palermaa’s confidence, while Troup had to wait until the fifth frame to find a strike. The American found his groove from there, while Palermaa faulted, sending the match down to the tenth frame. A strike would win it for the Finn, but he left one pin standing and could only spare. Troup stepped up and he made the strike to win, prompting a chorus of ‘USA! USA!’ from the stands.

“That is definitely a top-five match in my career,” said Troup. “It was a big momentum swing for the team. Going up two, we let it slip away yesterday and the goal for today was to get a winning session, which we have done. It was a very big game. I was stuck between balls; the first frame was the wrong choice but then there were some big shots that I made.”

The session concluded with a team baker match, which looked to be one of huge significance – if USA could lead 10-6 overnight, Europe would have a lot to do. America were perfect. After nine bowls they’d made nine strikes. Butturff stepped up and Weber Cup history was made; the first ever team 300 in the tournament’s 20-year existence.

“A lot of things were going through my mind making that shot,” said Butturff. “The team had a lot of faith in me and knew I was in the pressure situation, but I wanted to give them every strike I could. Being here for the Weber Cup for the first time, representing USA, I am speechless, it is an amazing feeling.”

Captain Barnes added: “The great thing about that game was all the communication going on in the background. Kyle made a blind ball change in the first frame, Jakob had a pretty good look, I had to move three or four all based off the moves the other guys were talking about. There was a lot of movement going on and that we got out of the first four frames with strikes was testament to how we have gelled together and work off each other.”

Weber Cup XX is taking place at Mandalay Bay Resort, Las Vegas with play daily from 11am until Friday, June 21 and is sponsored by Storm, the Official Bowling Partner of the Weber Cup.