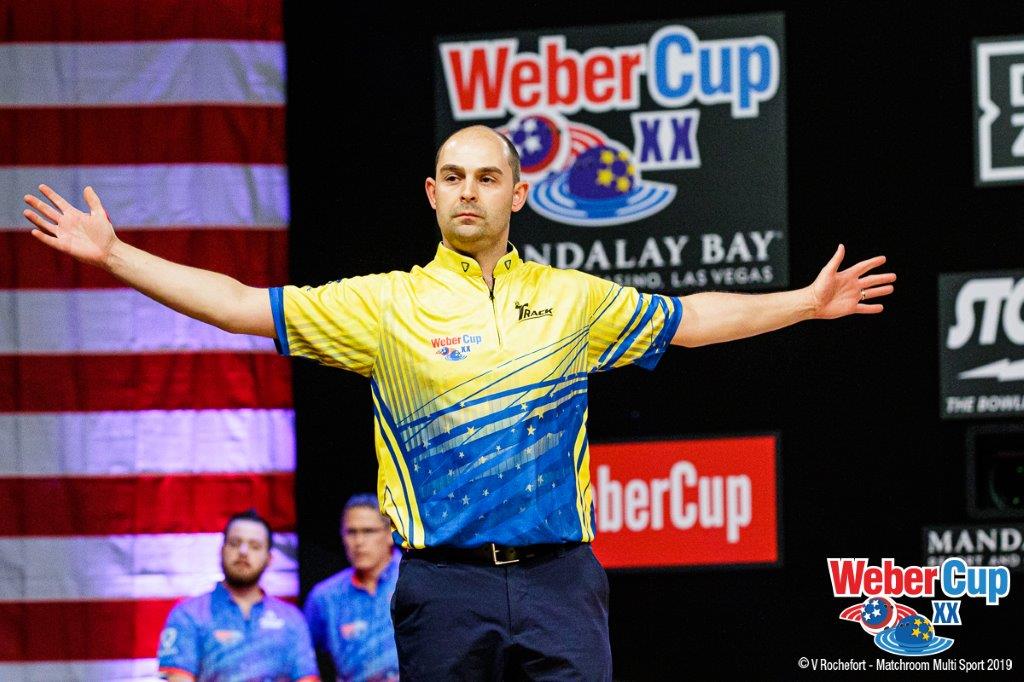 The Weber Cup is tied at 4-4 after the opening day of play in the USA vs. Europe tenpin battle at Mandalay Bay Resort and Casino Convention Center, Las Vegas, live on Sky Sports and DAZN.

America, the defending champions, led 4-2 before Europe hit back with English pair Stuart Williams and Dominic Barrett earning key points at the end of the session to leave the tournament locked at four each. The winner will be the first team to reach 18 points.

As is tradition, the tournament opened with a team ‘baker’ match and it was challengers Europe who drew first blood. The first singles match saw Anthony Simonsen up against Jesper Svensson. The pair met four times in singles and twice in doubles at the 2018 Weber Cup, with Simonsen taking five wins from the Swede, which ultimately played a major part in USA’s success.

Already this year they have faced one another twice. Simonsen took the first of their meetings 279-246 to draw America level after the baker match and the Texan again had his opponent’s number in match six, when a 257 bettered Svensson’s 223.

In match three, US rookie Jakob Butturff had the chance to give his side the lead against European captain Barrett. Despite not bowling at his best, the Englishman had led until an eight-spare in the ninth frame and then spared again in the tenth. A strike would have given Butturff the point but he left an open frame to shoot 244 to Barrett’s 255.

Barrett’s counterpart Chris Barnes then led from the front and struck back with a 263 to take down Williams, who bowled a 222 after leaving two frames open. America took the tournament lead for the first time this year when Kyle Troup saw off Osku Palermaa 232-223, the experienced Finnish bowler struggling on his return to the Weber Cup lane.

Simonsen’s second win over Svensson was followed by European success for Williams, who was locked in and shot his team’s best score of the day, a 276 to defeat Butturff’s 243. His strike in the ninth was named Storm Shot of the Day by Weber Cup legend Tim Mack.

The final match was the Fans’ Choice fixture, and the online vote matched the captains Barnes and Barrett. The US skipper started strongly with three strikes in his first four frames, while Barrett had three spares and an open frame. But the tables turned in the second half of the match after Barrett swapped balls and Barnes left frames eight and nine open, allowing his Euro counterpart to strike twice to level the Weber Cup at 4-4 after day one.

“I’m pretty irritated,” said Barnes. “I had a pretty big lead there, Dom saw the hook early in the game and I saw it all in the back half. We certainly had an opportunity and I didn’t do a very good job there. We were both fooled for a little bit but he made the right moves and I was slow.

“It’s nice to be the crowd favourite for a change. The louder these guys get, the better we are going to bowl.”

Barrett said: “Chris put it on me early and it was a pretty poor start for me. But as Chris said, I saw the lane being quite tricky early and managed to make some moves off of that and that was the difference.

“It was a key point for us. We have a long time now until we bowl again tomorrow, so we will go and get some dinner, sit down and really think about what happened today so we come back tomorrow fresh.”

Weber Cup XX is taking place at Mandalay Bay Resort, Las Vegas with play daily until Friday, June 21 and is sponsored by Storm, the Official Bowling Partner of the Weber Cup.