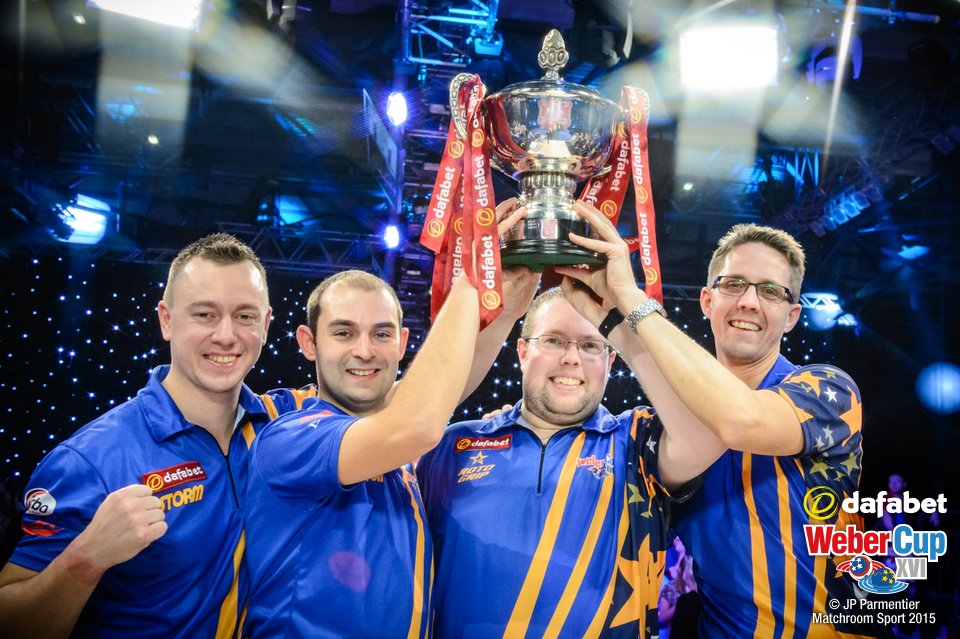 EUROPE ARE THE 2015 DAFABET WEBER CUP champions as Stuart Williams put Team America out of their misery with a win over Wes Malott in the first singles match of the final session. It gave Europe their third consecutive Weber win and tied the 16 event series up at eight championships each. It was also Europe’s biggest ever winning margin and surely makes amends for the hiding they suffered in 2012.

Leading 14-4 going into the final session, the Europeans could have ended it there and then but a game rally from Team USA took the match into the final evening. With the odds stacked against them it didn’t take long and it was Stuart Williams who delivered the final blows in front of a packed crowd at the Barnsley Metrodome.

For Dominic Barrett it was a crowning moment as he captained the European team for the first time in his eighth appearance in the Weber Cup.

“I am really proud. We came into this event knowing we were 8-7 down overall and we have had two really close years and we have had to fight an uphill battle. This time, we got to experience being this far ahead, being in control the whole time and not being under pressure at all. We got to enjoy it with three great team-mates and a great crowd. We can’t wait to come back again this year.

“We can’t explain how much the crowd mean to us, to have everybody here cheering us on and the messages we get from home from those who can’t make it, they are our fifth man. We had momentum before but what we have had this year has been unbelievable.

“The last couple of years, when we had to come from behind, it was really great on the last night but this time we got to enjoy it the whole way through. We were in control the whole time and got to take it in a lot more. There wasn’t anybody struggling apart from me at the beginning, but I managed to pick my game up with the help of the team.”

The Americans may well have to ask themselves some hard questions as they look to regroup and mount a challenge in 2016. Tommy Jones made his captain’s debut under difficult circumstances as Chris Barnes had to endure back surgery in the build up to the event.

“We got off to not a very good start and they kept pounding and pounding and every time they went up and bowled it seemed that they were bowling 250. Sometimes that is what happens when great bowlers get out there and do it and fortunately for them they did it and got way ahead without getting off the gas.

“You never stop believing and Dom is right, this crowd pulls for the Europeans but they have been great to us too and we appreciate that.

“A lot of it was us making some bad choices on the first night and letting them get relaxed. Anytime you get relaxed bowling on one lane it makes it a lot harder for the other team to get momentum. You can’t get 5-1 down because it was an uphill battle.”