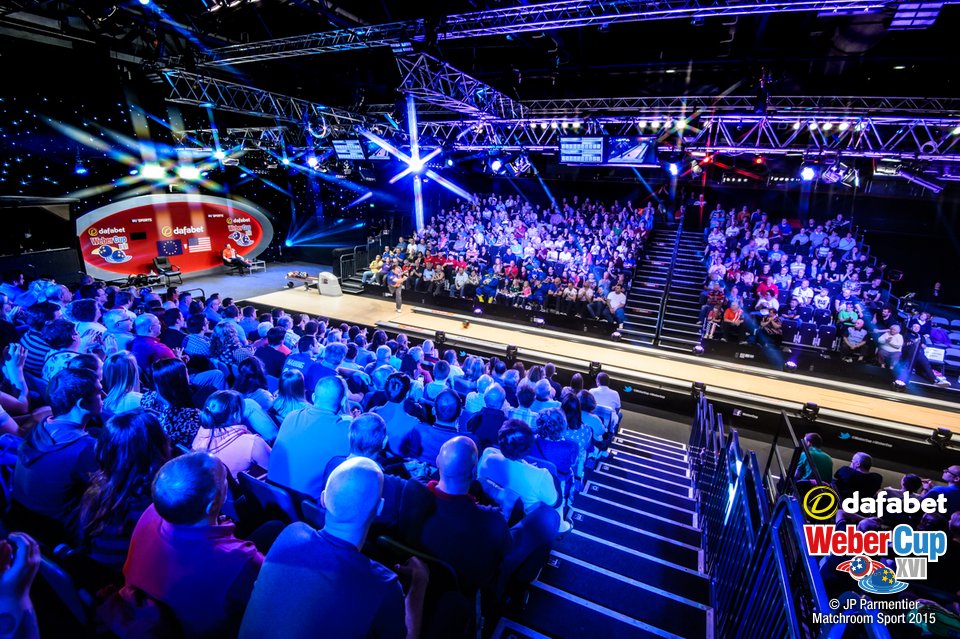 TEAM EUROPE is on course for the biggest ever winning margin in the 16 year history of the Dafabet Weber Cup as they lead the USA 14-4 going into the final session. They now need just three more points to retain the trophy while the USA needs 13. The session was another hammer blow for the USA as Europe took the session 5-1, with veteran Parker Bohn the sole point-winner for the USA.

The opening match of the evening continued the slaughter of the first two sessions as all eight players convened for the second Baker match of the competition. And it was Europe who nearly created history with the first ever televised 300 Baker. The strikes fell and it was Euro skipper Dom Barrett who was tasked with closing the match out. He struck the 10th and 11th frames before an obstinate 10 pin thwarted the 300 game at the very last.

In the next, Martin Larsen continued his excellent run at this year’s Weber as he outscored Wes Malott for a 31 pin win. That left the Europeans 11-3 up and the Americans looking into an abyss.

Once again though it was Parker Bohn III who got the Stars and Stripes fluttering as he put in another gritty performance to beat Dom Barrett and stop the rot. It was close all the way but a slip from the European captain let Bohn in and he closed it out to make it 11-4.

Any momentum that the Americans may have had went south in the next as Bill O’Neill continued his miserable run to go down by 48 wins to the ever-solid Stuart Williams.

“I hadn’t felt that nervous until I had my three practice balls and neither of the two balls I tried worked. I took a bit of a punt and went to the ball I used in the Baker game and it worked out ok,” said Williams.

Both players had appeared to have had a slight altercation at the conclusion of the Baker match; “I love a little bit of trash talk. When the American guys start to get behind they tend to use it quite a bit and I have got no problem helping them out with it.

“At the end of the Baker match, me and Bill were just laughing about the fact he had performed so well and didn’t get an opportunity to bowl the tenth frame.”

Tommy Jones gifted the next point to Europe as he lost from a very winnable position, letting Osku Palermaa back in to win in a 9th and 10th frame roll-off. Seemingly coasting, Jones left a horror split with his final roll and the game ended 168 apiece. Palermaa who had looked all over the place on difficult lane conditions, made no mistakes and he crashed home three strikes and a nine to take the match.

The final match was revenge for Barrett as he mastered the breaking lane to beat Parker Bohn III and leave his side 14-4 to the good.

Commented a proud Barrett, “I bowled one of the best games I have every bowled in the Weber Cup. The third game after the lane has been redressed is definitely the hardest because the oil has been pushed around so much by four others and then Parker is a left hander so has a fresh side.

“We knew that and that is why I choose myself to bowl there. We discussed it and the other three have been bowling better than I have and had better ball reaction in the games straight after the redress.

“Parker was a bit unlucky and was probably expecting to bowl more than 220 but I am very happy with that.

“You do make your own luck in this game but the way we have played and the camaraderie we have as a team, that has helped put things in our favour. What we have done has been unbelievable. We are the youngest team to have ever represented Europe at the Weber Cup and as a group we find it easy to come together as a team.”