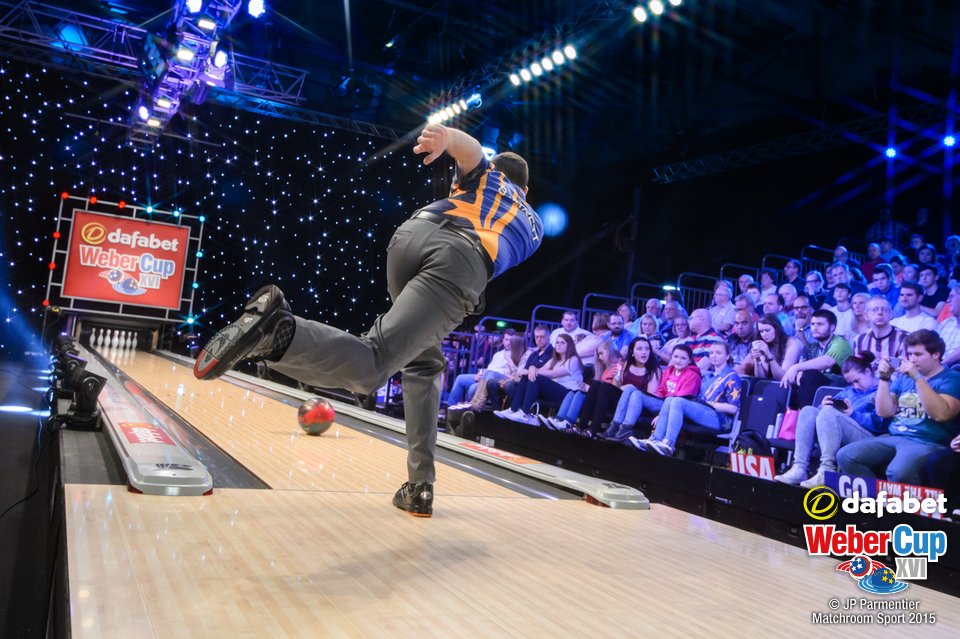 TEAM EUROPE piled on the misery at the Dafabet Weber Cup as they won the Saturday afternoon session 4-2 to increase their lead to six games as they’d surged into a 9-3 lead at the Barnsley Metrodome. The Americans threatened as they won the third and fifth games with great singles wins from Parker Bohn III and Tommy Jones, but were immediately pegged back as the Europeans kept their shape in the doubles matches.

The Americans were looking to at least win the session, but Malott guttered the opening ball of Saturday afternoon to leave the crowd stunned in silence and that set the tone for the match. His opponent Osku Palermaa started fast and soon left the big American behind as he ran out a 97 pin winner.

There was more misery in the next for Malott this time with partner Parker Bohn, as they couldn’t muster anything as they were soundly beaten by Stuart Williams and Osku Palermaa once again.

The US finally shifted a gear as Parker Bohn III earned his first Weber Cup point in what was the match of the tournament so far as he held off Stuart Williams to win by 12 pins. It was a big moment as it stemmed the points haemorrhage and gave the US a platform to launch some sort of fight back.

Commented Bohn, “We had to break Europe’s momentum and fortunately for me the monkey is off my back because I got my first win. We changed balls for that round and I picked up my speed a little bit trying to get the ball to shape up through the pins and fortunately aside for the first frame, it looked very, very good.

“I don’t think we are worried. We knew that 7-1 was a commanding lead but that being said, they aren’t even halfway there. You need 17 so there is still a long, long way to go.

“The atmosphere is outstanding. When I go to a new place I look to see how much they know about the sport of bowling and if there is one thing for sure, everybody here certainly knows our wonderful sport.

“They want to see great performances out there on the lanes and I believe regardless of what country you are from, you want to see the best on top.”

Any momentum the USA may have had slipped away in the next as the Europeans outlasted them for the point in a low-scoring scrappy match. Barrett and Larsen edged out Jones and O’Neill, scraping home by six pins after O’Neill left a damaging split late in the game.

Tommy Jones though recovered to come within one pin of recording his fifth Weber Cup 300 game. Having chalked up 12 consecutive strikes, he left the 6 pin standing in his final roll but it was plenty to defeat Martin Larsen and reduce arrears.

Once again though, any chance of some US momentum was thwarted in the final game of the session as they lost another close match as Palermaa and Barrett edged out Bohn and O’Neill to lead 9-3 after two sessions.

Euro skipper Dom Barrett said, “It is pretty intense out there and every time you step out on the lane you can really feel the atmosphere and how much it means to each continent. Stu and I are here representing England in England but there is so much more than that because we have the whole of Europe supporting us.

“We have picked the pattern for this evening and it isn’t too far away so we need to go and practice straight away. It is a long day and really non-stop for us.

Weber Cup XVI commences at 7pm (UK time) on Friday, October 16 with sessions at 1pm and 6pm on both Saturday, October 17 and Sunday, October 18. The entire tournament will be broadcast live on Sky Sports in the UK, ESPN3 in America and ESPN Latin America.