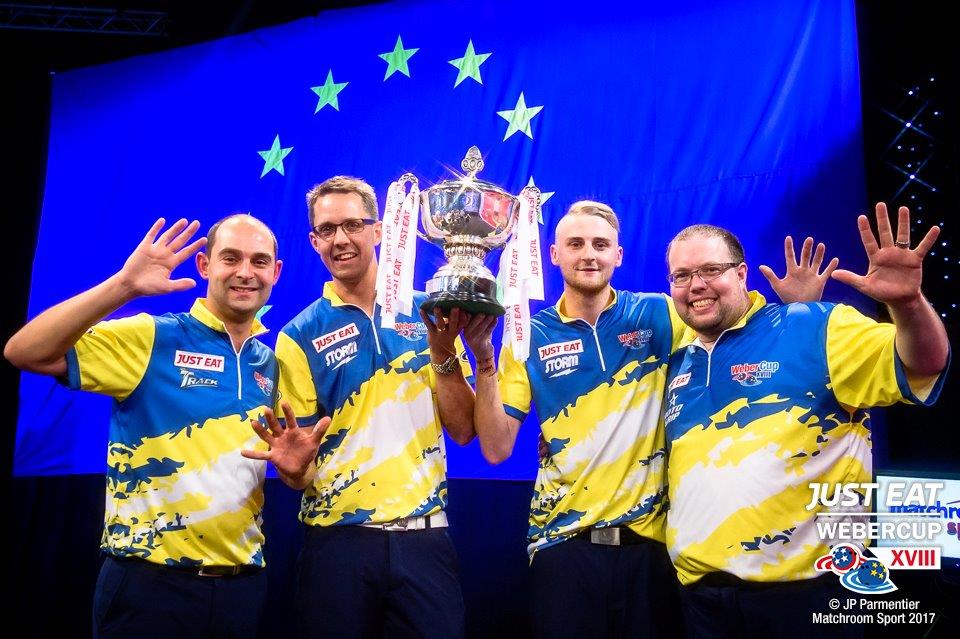 TEAM EUROPE are once again Just Eat Weber Cup champions as they overcame a stubborn USA to have the better of the Sunday as they ultimately coasted to a 19-12 victory. It was super-Swede Jesper Svensson who delivered the killer blow as he won a close match against Marshall Kent to seal the Europeans fifth successive victory to leave the Americans in the doldrums.

The start Sunday’s play looked so promising for the Americans as Kyle Troup beat Dominic Barrett to level the match at 11-11 with everything to play for. Unfortunately, they only managed one more win as Team Europe won eight of the next nine matches to collect another convincing win.

The Americans had finished the first two sessions 8-6 to the good but some astute captaincy by Barrett as Europe picked up the pace, left them with no answers as they searched for their first Weber Cup win since 2012.

For Dom Barrett in his record tenth Weber Cup appearance, it was a champagne moment; “I am extremely proud. They came out firing, it is their best team for quite a few years and they showed that early. They got us down in a spot we hadn’t been in for a few years and we had to dig really deep. We found our best yesterday afternoon and from there went on a hell of a run.

“It was 16-5 for the last 21 points and that is incredible and is down to the communication we had, how we gel as a team and the experience we have on this lane. I am only 32, that is old compared to the other guys on the other team, but I have plenty of years left and this is one hell of a team.”

American captain Sean Rash was reflective in defeat; “There was a big difference between the four of them being together for so long. Myself and EJ have never been here, but Kyle and Marshall were hungry and wanted it this year and played amazing compared to last year.

“EJ and I struggled at times with ball reaction and getting comfortable with our footing. We came out firing and it seemed like the hits were coming our way early and they weren’t bowling that well at the start. But they had a talk and they are class gentlemen and athletes of our sport. In the beginning, we bowled well but in the second half of the tournament they out bowled us.”