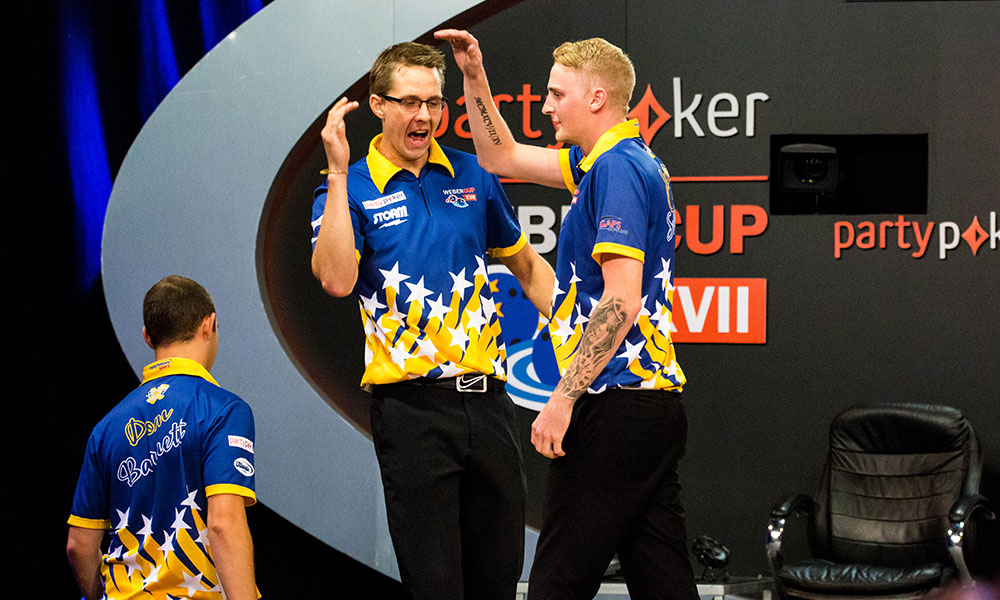 Europe one away from victory

EUROPE STAND on the brink of yet another partypoker Weber Cup win as they took the fourth session five matches to two to leave themselves within one point of victory.

21 year-old Swede Jesper Svensson was the star of the show as he came through his four matches with four wins to set Europe on the road.

Commented European captain Dominic Barrett, “Stu won it for us last year and we will put him out first, then I will have a go and then we will save Jesper for the third match when the lane gets a little more messed up.

“We came in with a game plan of being quite aggressive. We had to turn up today and bowl well and we wanted them to know how well we are bowling.

“Nobody has ever won the Weber Cup four years in a row. It has been a great event so far, we still need to win one more but I am very sure we can do that.”

Team USA, needing two points to carry the event into the evening session, got off to a great start as rookie Kyle Troup battled hard to steal the point from Dominic Barrett. The Englishman looked good for the win but a spare in the closing stages opened the window for Troup.

Making his debut, Sweden’s Jasper Svensson is on course for top points scorer honours as he bagged another two back-to-back wins. The first was in the company of Dominic Barrett as they comfortably beat US rookies Marshall Kent and Kyle Troup.

The second was a closer run thing as he beat US captain Parker Bohn who wasn’t having the best of times. The Swede, with his unorthodox approach and two-handed delivery, has looked unbeatable as he settled into the event.

Wes Malott was the man to halt the decline as he beat Martin Larsen to ensure that the event went to an evening session. Nothing was easy for the American but he hung in there to take the point.

Malott was scheduled for three consecutive matches and his second was another defeat for Team USA as partnered by Parker Bohn, the European pair of Martin Larsen and Jesper Svensson had too much for them. They ran out 45 pin winners.

The final match of the session saw Jesper Svensson and Wes Malott square off and it was the Swedish wonderkid who once again delivered the goods. Baker matches aside, Jesper has won eight out of eight matches and looked unstoppable.