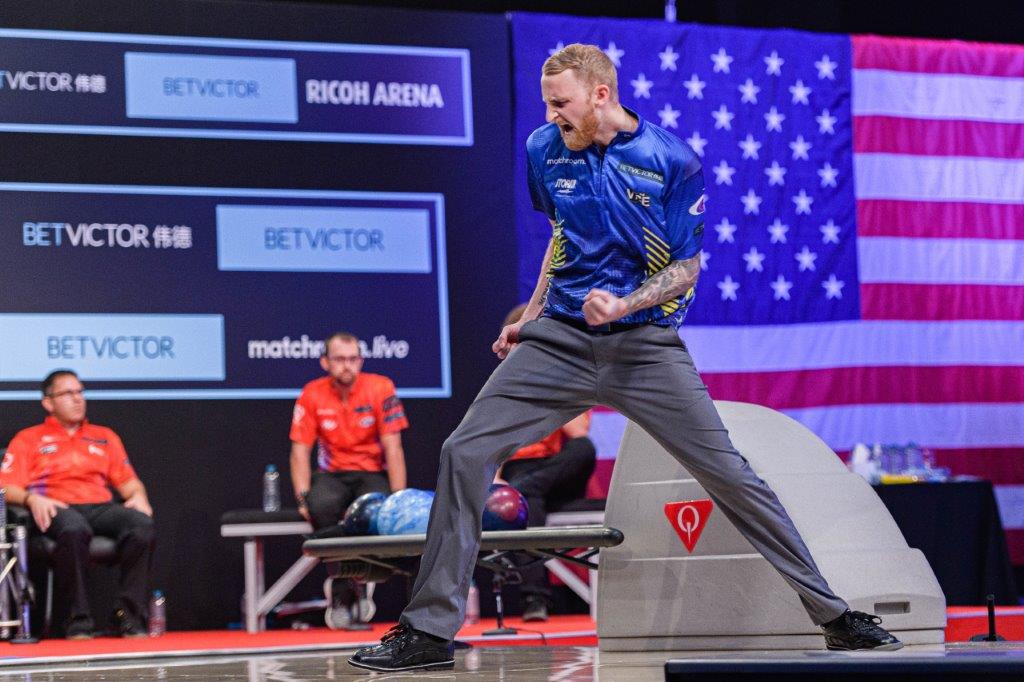 The first team to 23 points will take home the trophy, with USA aiming for a three-peat, and the defending champions had a perfect start to the final day of play.

Last summer, Anthony Simonsen was one quarter of the USA team which bowled the BetVictor Weber Cup’s first ever Baker 300. This year, he did it all by himself, bowling the eighth perfect game in Weber Cup history as he beat Dominic Barrett in the first match of the day.

“I was thankful enough to be part of a Baker 300 last year so to have my own singles one here on the Weber Cup lane is pretty special,” said Simonsen.

EJ Tackett then bowled eight consecutive strikes at the start of match two, prompting memories of the back-to-back Weber Cup 300s made by Tommy Jones and Chris Barnes in 2013. Bit an eight-spare in the penultimate frame put and end to that, though for Team USA it made no difference to the result, Tackett beating Stuart Williams 231-288.

The home side’s resistance, though, was again brief, and USA returned to normal service in the next match as Tackett and Chris Barnes made 278 while Barrett and Palermaa struggled to 225.

Rookie Thomas Larsen, though, has been one of his side’s positives throughout the event and responded well to a slow start against Troup to end the match with a turkey to steal a 225-222 win after the Afro Fish lost his way in the second half of the match.

Troup’s struggles continued in the next match, as he teamed up with Simonsen. The American pair could only bowl a 211, the lowest US score in the tournament, while Svensson and Williams scored 265 to get Europe to 12, still seven points behind the defending champions.

The session’s final match was a free captain’s pick; Barrett and Barnes were able to select their bowler right before the match and Svensson answered his captain’s call with a 289 against Simonsen, who bowled a 278.

That meant Europe and won three consecutive points for the first time in this year’s BetVictor Weber Cup and finally had some momentum on their side heading into the evening session.

“My heart was beating fast, I was nervous and to be able to bowl that stroke to win the game for myself and my team, that’s what the Weber Cup is about,” said Svensson. “You need a little bit of luck to come your way and this time it was on my side. That hasn’t been coming our way so far, but this game it did.

“We have such confidence in each other that we have to keep believing. It was a rough start to the day but three huge points to finish it off and we go into the break with a good feeling.”