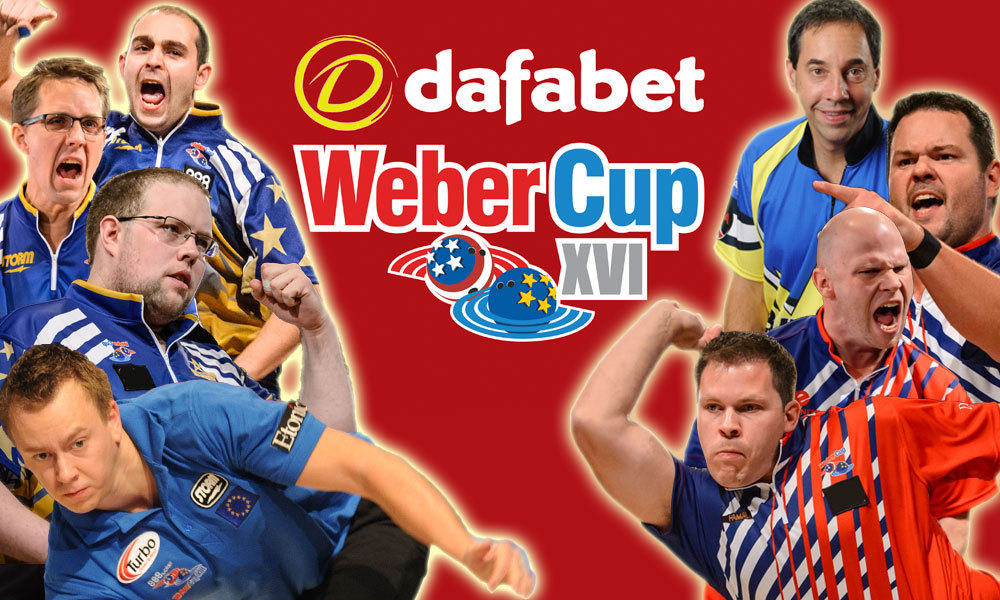 DAFABET are the title sponsors of Weber Cup XVI which takes place this weekend at the Metrodome, Barnsley. Following on from successful sponsorships in snooker and boxing, the Asian-based company now lend their name to one of the biggest events on the tenpin calendar.

Following last year’s epic nail-biting finish where Europe snatched victory in the final few pins of the deciding game, the giants of European and American tenpin bowling will be reconvening this weekend to contest the 16th annual Weber Cup.

Chris Barnes was initially slated to captain the American team but injury prevented his participation, with Wes Malott stepping in having made his debut last year.

The team will now be captained by Weber Cup 300 man Tommy Jones, who makes his tenth appearance with former PBA Rookie of the Year Bill O’Neill also on the team. The new kid on the block is 52 year-old PBA legend Parker Bohn III who makes his debut in the competition.

Europe’s Williams commented: “The Weber Cup is very special for everybody on both of the teams. It is especially great for me and Dom as it is in England and we have the home crowd on our side.

“I couldn’t imagine having to go and be in a hostile atmosphere for the Weber Cup. It is great that when you strike everybody cheers and is on your side. You can almost feel the crowd willing the Americans to miss and that is reassuring when you are up on the stage.

“For Europe to level the overall score to 8-8 would be great. We were so far back just a couple of years ago so to get back to 8-8 and for the first time win the Weber Cup three years in a row would be fantastic.”

For America’s Malott, the pain of conceding a 14-10 lead to lose last year’s Weber Cup 17-16 is a driving force this time around.

“I am honoured and excited to be back this year,” he said. “We have a lot of fire under us from what happened last year; to have such a big lead and have it taken away from us, to have it right there and then see it ripped from us.

“We have spoken about what happened last year and it is something that is there and will be on our minds this weekend.

“We had such a commanding lead and to be able to come back and take the Weber Cup away from the guys who took it away from us is something that has been on my mind for a full year. The time has come now to take the Cup back. We will be a force to be reckoned with.

“To have Parker here for his first time is going to be incredible. When I was about 15 and began to really start understanding the sport, Parker Bohn III was one of the guys I looked up to. I have a feeling he will be a big part of how this plays out.”

Tenpin fans around the world can enjoy the full HD production online at www.webercup.com with a season pass to watch the entire event costing just $19.99. Streaming of Friday’s opening session will be available free of charge. To register for the live stream visit www.webercup.com/watch-live and follow the instructions.