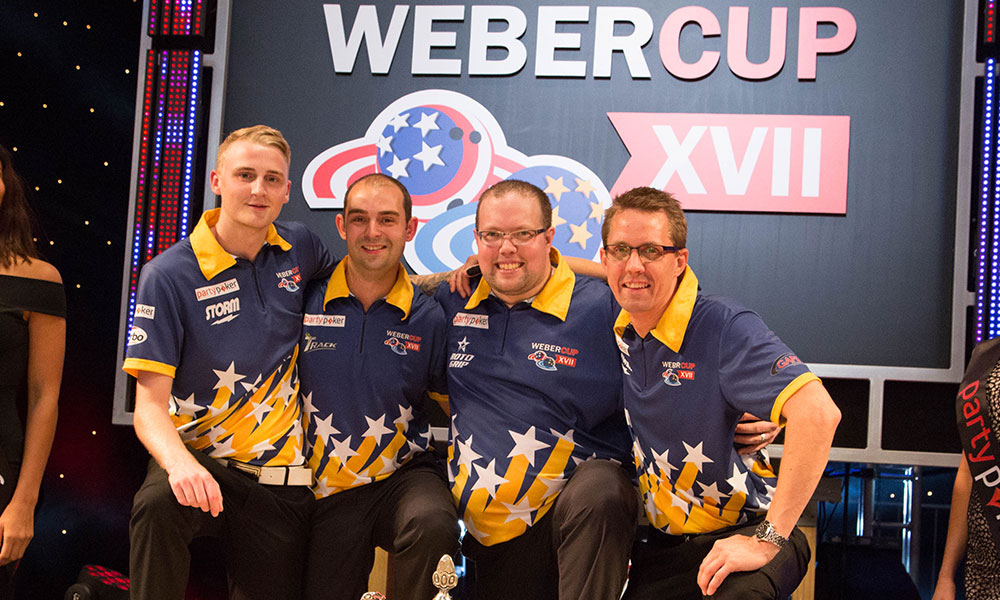 Team Europe’s record-breaking 2016 Weber Cup squad will be back in its entirety for this year’s transatlantic tenpin tussle, which returns to its familiar Barnsley Metrodome home from September 8-10, with tickets on sale now.

England’s Dominic Barrett returns as captain with compatriot Stuart Williams making his seventh appearance in the Europe vs. USA showdown.

Sweden’s Martin Larsen is unbeaten in five Weber Cups and the team is completed by Jesper Svensson, who’s incredible debut in the Cup helped lead him to be crowned Rookie Sportsman of the Year in front of millions of TV viewers at the annual Swedish Sports Gala.

Europe won the Weber Cup for a record fourth consecutive time last summer, beating Team USA 19-11 in Manchester and now have their sights on taking home the trophy for a tenth time.

“It’s an honour to be captain again,” said Barrett. “The Weber Cup is the highlight of the year, not just for myself but for the whole team. It’s not often we all get to compete as a team and share that experience together. We’ve had some really good years and we look forward to keeping the momentum going.

“We are excited to be back in Barnsley. The crowd at the Metrodome are fantastic. They act like our fifth man and give us the edge. We can’t wait to get stuck into the Americans.”

Williams said: “I am so excited to be heading back to Barnsley, the home of the Weber Cup. I have so many great memories of winning in Barnsley, especially the baker game final match win in 2014.

“I can’t wait to get back on the lane with Team Europe and try to extend our record to five wins in a row. We will be ready for anyone the American team bring with them.”

Larsen added: “To get the honour to represent Europe in the Weber Cup for the first time in 2009 was a dream come true for me. That I will now bowl my sixth Weber Cup feels unbelievable.

“Europe has many great bowlers but very few get this chance. Everyone that has ever been on that Weber Cup lane knows what I mean when I say that’s THE lane to bowl on. I am looking forward to feeling the magic atmosphere again in September!

“Together with the great crowd in Barnsley we have proven hard to beat, but I know the guys from ‘over there’ are getting tired of losing so they will get to England well prepared for sure.”

Svensson commented: “It’s a great pleasure to be selected to bowl for Team Europe again and I am already looking forward to see everybody in Barnsley. Last year’s event was a great experience and perfect performance for us so I hope we can keep doing what we did last year and get another victory for Europe!”

The American team for Weber Cup XVIII will be announced shortly.

For the first time fans will be able to select their seats when purchasing tickets – allowing those who book early access to the best seats in the house.