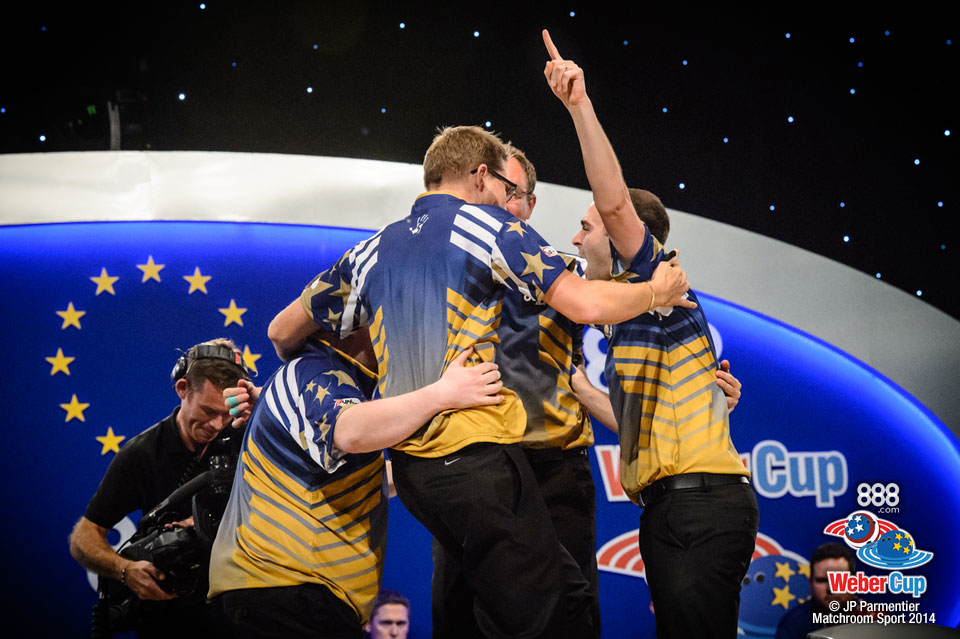 The match went down to the final game after the two sides had both enjoyed stunning highs and lows on a final day packed with memorable drama.

The Europeans had trailed by four points going into the Sunday evening session as the Americans, who had lead from the opening game, needed just three points to regain the title. However, they swept seven out of the nine matches to steal the coveted title 17-16.

With Europe one away from victory, the penultimate match featured the two captains selecting their opponents player and it was debutante Wes Malott who delivered a stellar performance as he came back to steal the point in the death and take it to a Baker decider.

The tension was gripping as both teams entered the arena knowing that the slightest mistake could hand the 888.com Weber Cup to their opponents. Both teams stayed in it and when Tommy Jones struck in the eighth frame it looked on for the Americans.

An 8/10 split in the ninth frame though, from Chris Barnes left USA hopes heading for the gutter and it was Dominic Barrett who delivered the hammer blow as he struck in the tenth for a glorious comeback victory.

The jubilant European captain, Mika Koivuniemi said, “I can’t really find the words for this. It was unbelievable last year and this is an even bigger win. I don’t know how we did it, we came back and all four guys threw great shots when they needed to at the end.

“We are a team and for me this has to be my biggest win as a team player, especially how it happened. This feeling we have now, we want to have it again. We all stepped up. We lost a couple of tight matches early but then we bowled well, it is unbelievable.”

For the American skipper Chris Barnes, it was a bitter pill to swallow after leading throughout; “I feel miserable, sick. I threw the shot that lost us the Weber Cup. I have made a lot of shots which have meant a lot to me and I have had my share of success and my share of disappointments but it is always much worse when you have three other guys counting on you.

“They took a short pattern and that suited their balls, we didn’t have balls we could throw. That wasn’t all, we had some chances but there was such a vast difference in average. We got it down to one game and in the end regardless of the balls we had enough ball reaction to win, we had an opportunity to win, and I gave it away for our guys.”

Dominic Barrett who delivered the killer blow, said, ““I got up to pick up my ball and my heart was pounding. I wasn’t going to throw the shot until I had calmed down a little bit. I got on the approach and into the motions of a good shot and honestly after that I saw the ball go down the lane, I saw the pins fall over and that was about it.

“Normally when you go into these final sessions you think one game at a time but we never actually spoke about anything like that. We all know, we are all champions, we all know what it takes to perform well and what we can do but we never really spoke about even keeping it close and not letting it look embarrassing, it was just ‘let’s go’.

“This is a highlight for me. We were down last year 5-1 after the first session and we were five down with one game to go of the third session this time around so we were even further behind. We didn’t enjoy last time so much but we had such a great day and everyone here, the fans, really helped us and we got the momentum.

“When the American’s got the momentum it was just the four of them and a few others but when we got momentum it was the four of us and everyone you see in the crowd.”
The day had started well for the Europeans as they selected a 36 foot lane pattern that they felt would favour them and so it proved. It was Martin Larsen who won the opening point of the final session beating Chris Barnes at the death. He was followed by Stuart Williams, who had a poor showing in his one outing in the afternoon session.

The Arizona-based Englishman revived himself sufficiently though to beat Bill O’Neill by 47 pins to keep the momentum going as the score moved to 12-14.

Finland’s Mika Koivuniemi decision to switch to the shorter oil pattern looked to be paying dividends as he swept past Tommy Jones 213-173 to make it three wins from three games. That took the overall score to 13-14 USA as the Americans looked distinctly uncomfortable,

“We picked the shortest pattern which is going to hook more. I think that is the best chance for us to make a move tonight – we took a risk and hopefully it pays off. We still have to throw good shots and bowl great and I am feeling really good right now and the next match, Martin against Chris, might be the most critical match of the tournament.”

It was Barnes who prevailed with a magnificent captain’s performance as he took down Larsen, who had been the biggest striker of the tournament to date. 260-246 was the score as the match came down to the final frames.

Barnes was thrilled to inch his team nearer to the finish line, “I had been shut out so I am happy to win a point today because the team were winning every point and I was the lone wolf out there losing points. I don’t know if confidence is the word but we have some breathing space now.”

Dominic Barrett reduced the lead yet again as he beat an out of sorts Wes Malott 233-208. The big Texan never looked that comfortable with the conditions while Barrett stuck his head down and took advantage to leave it 14-15 to the Americans.

The next match was an absolute thriller as Mika Koivuniemi beat Tommy Jones by the narrowest of margins to set the match all square at 15-15. Jones needed a strike in the final frame for victory but the ten pin stayed up as his head sunk in despair.

“That was really nerve-wracking, this is huge, it is now the best of three.” said the European captain.

Stuart Williams put Europe in the lead for the first time in the 888.com Weber Cup and left his team within a point of an epic victory. His 266-236 win over Bill O’Neill was his best showing of the event and couldn’t have come at a more opportune time.

It seemed inevitable that the 888.com Weber Cup would come down to the final match though, and so it came about as Wes Malott dug deep to pip Mika Koivuniemi by 10 pins. Big Wes had guttered his ball in the seventh frame and looked dead in the water as Koivuniemi moved ahead. He summoned up reserves out of nowhere though to pip the faltering European at the post and set up the dramatic Baker decider.

This year’s 888.com Weber Cup is the fifteenth instalment of the premier tenpin event. Named after American bowling legend Dick Weber, the tournament features two four-man teams battling it out over three days in a series of singles and doubles matches. Europe took the crown in 2013 with an impressive 17-14 victory, but America has still won more titles with eight victories to six.

The tournament is produced by Matchroom Sport television and subsequently broadcast on Sky Sports as 16 x one hour programmes as well as by various stations around the world.