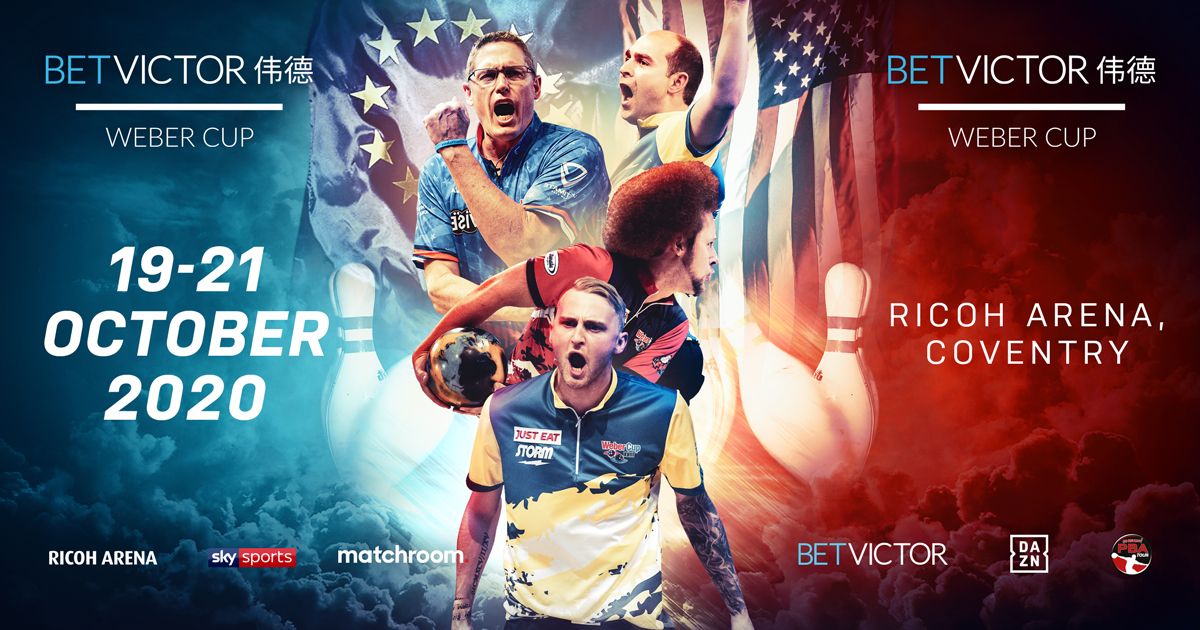 The 2020 BetVictor Weber Cup will now be staged behind closed doors at Ricoh Arena, Coventry from Monday, October 19 until Wednesday, October 21, live on Sky Sports.

Matchroom Multi Sport had been hoping to be able to allow fans into the event, however, given the current government guidelines around fans at sporting events, the decision has been taken to stage the event behind closed doors.

The tournament will now be staged at Ricoh Arena in Coventry, where an event ‘bubble’ can be created with players tested on arrival into the country.

The event will be shown live, in full, on Sky Sports in the UK and by international broadcast partners including DAZN, Viasat, CCTV China, and Matchroom.Live. All ticket holders for the 2020 BetVictor Weber Cup will receive automatic refunds.

Emily Frazer, Managing Director of Matchroom Multi Sport, said: “Despite what will be a disappointment for live bowling fans for this years’ BetVictor Weber Cup, with the current climate and uncertainty surrounding spectators at live sporting events, making the decision to stage this behind-closed-doors is the best foot forward for the event and players.

“We fully appreciate all of the already hard work put in place by the team at Morningside Arena in Leicester, however in order to successfully maintain a strict ‘bubble’ protocol, the change in venue allows us test and quarantine players and event personnel with on-site accommodation.

“As per all Multi Sport events, we are in constant discussions with the Government to ensure we stay up to date and adhere to regulations set out. With current travel restrictions in place across the world, we must quarantine and create a bubble environment for our competing international players throughout the event. It has always been our aim to open the doors to spectators, however with the contributing factors as well as many patiently waiting fans who have purchased tickets, booked accommodation – it is best to make the decision now to avoid any further disappointment.

“A silver lining amongst this is we have the ability to re-schedule the event Monday – Wednesday in the week allowing for better scheduling on Sky Sports and our international broadcasters. “Furthermore, the tournament has been increased to six sessions overall with more matches and a total of 24 live hours – more tenpin on TV!

“A new feature to the event this year is the increase to five-man teams, which will allow for a more competitive tournament; players will also be able to feature in the commentary booth – a great addition to our programme.

“Despite being staged behind-closed-doors, we are fully committed to how we can be creative with the set, staging, fans-at-home engagement and the television programme so we can deliver a fun atmosphere for our players and to our fans across the world!”

The BetVictor Weber Cup returns to England as Chris Barnes’ USA side aim to make it three in a row after they defended the title against Europe in Las Vegas in 2019. Barnes is joined by Bill O’Neill, Kyle Troup, Anthony Simonsen and EJ Tackett on Team USA, while Europe will be led by captain Dom Barrett, alongside Stuart Williams, Jesper Svensson, Osku Palermaa and Thomas Larsen.

Paul Michael – Commercial Venue Director said “We are really excited and honoured to be able to host the Weber Cup for 2020 behind closed doors as its strengthens our relationship with Matchroom Multi Sport and demonstrate the diversity of the venue and its ambition to encourage more elite sports to Coventry.”

Be On The BetVictor Weber Cup Big Screens!