Established in 2000, the Weber Cup is the annual USA v Europe tenpin bowling challenge – the Ryder Cup of tenpin. Named after American bowling legend Dick Weber, the man who helped shape modern bowling, the event features two five-man teams competing over three days in a series of singles and doubles matches. Each team will be made up of the two captains, top two players on the PBA Tour Rankings for each team plus two captain’s wildcards each. 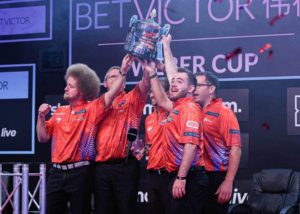 Since its inaugural event in Warsaw, Poland, the Weber Cup has taken place exclusively in the UK and it will head to the Morningside Arena, Leicester in 2021.

After 15 years of the Weber Cup the score currently stands at 11 – 10 to the United States having the USA won the last three titles. The 2020 event saw the crown head back to the states once again with a 23-18 win.

With a single-lane arena, the Weber Cup is a unique environment for bowlers to compete. Coupled with 500-strong crowds, the tournament represents a tough pressurised proposition for the competitors.

Since 2006, the event has included players from the PBA Tour in the United States and they have certainly helped to elevate the status of the competition.

Played over three days, all matches are over one game with total pinfall determining the winner.

The 2021 Weber Cup will be broadcast live on Sky Sports in the UK and is also packaged as 18 x one-hour highlight shows by Matchroom Sport and syndicated around the world. Viewers in the USA will be able to see the action live on DAZN.